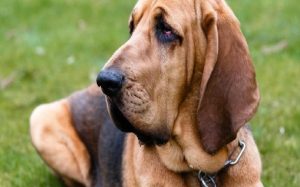 The Blood Hound falls on a hunting group that hunts by scent. They are mostly known by their distinctive feature which is long wrinkled face with loose skin, long ears, and sunken eyes. It is one of the largest breeds of hound and one of the extremely docile and loyal canine.

The Blood Hound drools a lot and if he turns his head, he can throw his drool as far as 20 feet. Although they seem lazy with their dull expression, they are not when it comes to follow a scent and track down something. In fact, they are extremely happy to do so. He becomes so devoted to the work that he cannot be distracted until he finds his quarry.

The origin of the Blood Hound is unknown but likely to be in France. The ancestors of today’s Bloodhound is known by St. Hubert hounds, bred by the monks of St. Hubert’s Abbey. In 1805, bloodhound’s first tracking thieves were recorded. They were bred to track deers, wounded wolves, and other big game. Blood Hound has also helped police to track the lost child lost person and criminals. After tracking down the person, they are never known to attack them.

Blood Hound is ranked 52nd by the American Kennel Club among the registered 193 breeds.

Blood Hound is extremely friendly with children. They are affectionate towards them and adores them very much. Blood Hound is very tolerant of children and does not mind them climbing their back, pulling their ears and tail. However, every dog should be supervised while you let them play with your kids.

The Blood Hound has two personalities. One is highly alert and active when it comes to tracking something. Whereas, another is lazy and relaxed when they do not have anything to track down. Their detective mode gets on when there is a job to track some criminals.

Blood Hound is extremely friendly with people and can get along with strangers and other pets very well. They are patient, noble, independent and loyal dogs. When it comes to trails, they are tireless breed.

Blood Hound can be hard to train as they are independent and quite stubborn. If you are a soft person than they will manipulate you with their droopy eyes.

If you are a consistent and confident owner and can prove leadership to them, they will be easy to train. Blood Hounds are happy to trail, therefore enroll them in advance tracking activities.

Bloodhound is more likely to suffer from bloat and the owner should be cautious of this life-threatening disease. They are very well known for eating anything they find which can lead to expensive surgery. Therefore, the owner should keep an eye on him and things should be kept out of there reach. The other common health problems that can be seen in canine are:

Bloodhound has a loose and short coat. They have a musty canine odor which cannot be get rid of no matter how much you bathe them. They come in colors like black and tan, liver and tan, and red.

The average cost of a Bloodhound puppy is $800-$1200. However, the cost is cheaper, if you plan to adopt one. The cost is around $300 with the expenses of caring for the puppy before adoption.

Similar Dog Breeds to The Bloodhound