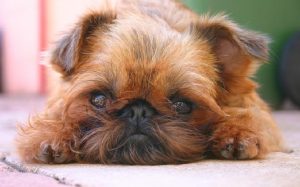 The best way to describe the Brussels Griffon is a “monkey face”. These dogs have a similar face as monkeys with long mustache with a prominent chin and large eyes and cute little size.

Brussels Griffons are great for apartment dwellers since they are tiny. Despite their size, these little pooches are spunky, mischievous, playful yet stubborn. Thinking of adding one little spunk in your family? Then you must know about their behaviors and origin to make sure you can keep your pet happy.

Brussels Griffons date back to the 1800s. They were originated in the city of Brussels, Belgium where they were bred to hunt and kill vermin in stables, especially in the horse-drawn. These tiny little dogs were also used to guard taxi in Brussels.

These dogs were developed crossing between the German affenpinscher and the Belgian street dogs. As a result, a Griffon with a rough coat was produced. Later, in the 19th century, Griffons were crossed with the pug to produce a smooth coat variety.

In the 1870’s the breed became the favorite dogs of the Belgian Queen, Henrietta Maria, which gave the dogs royal patronage. The Brussels Griffon soon became famous among the Belgian elite, and efforts were put together to make the breed more exaggerated in appearance.

The American Brussels Griffons was founded in 1945 and the breed standard was approved in the year 1960 by the American Kennel Club. Later, the parent club for AKC membership was accepted in 1982.

Brussels Griffons do not like being chased, forced to sit on the lap or unwanted hugs. Since children wants their furry pet to play or sit on the lap for long and if they cannot escape the grasp, they may growl or snap. For these reasons, it is quite risky to leave your child with the tiny pooches.

They are best with older children. However, Brussels should be taught that these kind of behaviors are not acceptable. On the other hand, children should also be taught on how to handle their tiny friends.

The temperaments of Brussels Griffons range from outgoing and active to reserved verging on shy. It is believed that the Griffons will do well with older people since they can give them enough affection and love. Children might make them nervous when around. They are not so fond of kids. The Brussels Griffon is tiny but has a bossy streak double their size.

These breeds looks like a “purse dog” but are fragile, sturdy and fearless. They enjoy being the center of attention and will love to have many interesting interactive sessions with their owners showing their clownish behaviors.

Brussels don’t like staying alone, they will easily develop separation anxiety which will lead to aggression and destructive behaviors. They may get depressed if left alone. These little pooches consider them as the “king” of the house and should always be treated with love, affection and even respect.

Training a Brussels Griffons is challenging. They are stubborn and want to do things on their own. These dogs don’t like being ordered. They won’t reply on the harsh tone of the voice. Patience and confident leadership is required while training your pooches.

Positive reinforcements and treats might help you to train the Brussels Griffons. Once, proper leadership is established, they will happily and eagerly perform for the crowd to get praised. They will thrive in advanced obedience classes and agility training.

Some of the facts related to Brussels Griffon dogs are as follows:

Brussels Griffons are generally healthy but like other they are prone to certain health diseases. Some of the diseases suffered by griffons are:

Some of the colors of Brussels Griffons are:

Brussels Griffons can give birth to 1 to 3 puppies at a time.

The average cost of Brussels Griffon puppies ranges from $800 to $1000 USD.

The weight of Brussels Griffons is about 6 to 12 pounds.

Some of the breeds similar to Brussels Griffon dogs are: