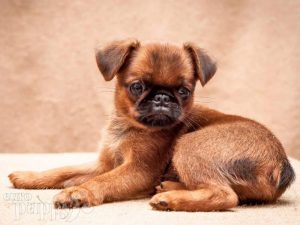 The ‘monkey face’ newborn puppies, Brussels Griffon is one of the cutest and adorable babies of all breeds. Having newborn members in the family is quite overwhelming for everyone.

Have you ever thought about the responsibilities that come along with the puppies? Well, there are certain behavior and physical changes about Brussels Griffon puppies that you need to understand in each development stage.

Newborn Brussels Griffon will spend 90% of the time sleeping. These puppies will only move to pile up to their littermates and mother to regulate the body temperature.

These newborn puppies will not be able to hear, see, or sense anything until the end of week two. Furthermore, the neonatal stage is very delicate for newborn Brussels Griffon.

They would require a lot of care and attention. In addition, if any puppy is separated from the group they are likely to die due to hypothermia.

During the transitional stage, you can see a lot of behavior and physical development in Brussels Griffon. Your puppies will open their eyes and will be able to hear for the first time. In addition, in between two to three weeks you can notice your baby Brussels starts walking.

By the fourth week, your Brussels Griffon would want to explore the surrounding by running and jumping around with their littermates. Moreover, their teeth starts growing and they may try to steal their mother’s food from the bowl.

Early socialization is very important for Brussels Griffon. These breed are sensitive and reserved. It is important that you socialize your puppy from an early age.

From this stage onwards the puppies will start playing both with their littermates as well as with the people. In addition, by the end of fourth weeks, Brussels Griffon will control their bowel movement as they spend most of the time away from the whelping box.

By the eighth week, Brussels Griffon puppies will start getting familiar with the surrounding. You will need to socialize them with other people as well as animals. Ina addition, by the eights week, you can also start basic house house training for Brussels Griffons.

Ranking stage is where your Brussels Griffon are mostly affected by their littermates and people around them. By this stage your puppy is now aware of the fact that their pack consists of both dogs and humans. Furthermore, if you do not teach them the difference between submission and dominance then they will leave no time to dominate you.

From the starting of third month your Brussels Griffon puppies will start developing independence and confidence in them. They would require more attention and should be trained consistently. Moreover, when they are four months old, you can even send them to puppy training classes.

Now, Brussels Griffon are no more puppies. By this age your Brussels will start losing their puppy face and resemble more like the miniature version of their adult self.

They will now lose their baby teeth and their second teething phase gets started. In addition, your Brussels Griffon will have more energy and stamina. They can now play for hours outdoors, which increases their diets.

Puppy vaccination usually costs between $75 – $100. However, it depends upon the area you live in and varies upon veterinarian to veterinarian.

What Diseases Do Vaccines Prevent Against?

To conclude, these were the responsibilities you will have to face when you have a newborn Brussels Griffon at home. You should keep a close eye on their behavior and development stages for their well-being as well as for a wonderful companion at home.