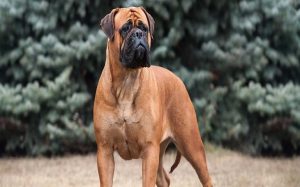 The Bullmastiff is a large and powerfully build dog having a big head that has a black patch on the face, wrinkled head, and dark hazel eyes. They have V-shaped dark ears. They are very protective of their people and property which make them a great watchdog.

Bullmastiff does well with people but are somewhat aggressive towards other animals, especially towards male dogs. They have a strong prey drive and are not suitable to live with small animals like cats.

The Bullmastiff was developed in the 19th century by crossing Bulldogs and Mastiffs together. They were bred to protect English estate from illegal hunters. They were not bred to attack any intruder but to hold them until the owner returns.

The Bullmastiff is recognized by the American Kennel Club in 1993 and currently ranked 48 of 193 other registered breed.

Bullmastiff does very well with children. They are patient and tolerant of them but due to their large built body, they might knock over small children. They should be watched and supervised.

Bullmastiff is loving and affectionate towards family members. They are loyal and protective of their people and do well as a family pet. However, they are very suspicious of strangers and should be socialized with variety of people at its early age.

Bullmastiff makes a great watchdog and will warn his master if he sees anything suspicious around them. Although they are powerful and originally bred to protect property, they are not likely to attack an intruder. In fact, they will hold them until their master comes back.

Bullmastiff is easy to train if it falls on the hand of a consistent and confident leader. They are not for a first-time dog owner or a person with a soft heart. They need positive reinforcement methods of training that includes treats and lots of vocal praises. However, don’t include only treats as a reward as they will only obey you if you have some treat on your hand.

Bullmastiff is prone to hereditary defect and is less likely to suffer from any serious health problems. The average life expectancy of this breed is 8-10 years, which is less compared to many other dog breeds. Some of the common canine diseases that they might suffer are listed below:

Bullmastiff has a short and dense coat that shed moderately throughout the year. Their coat comes in three colors, red, fawn or brindle.

The average cost of Bullmastiff puppy is between $1500- $2000. If you want to adopt then it will cost around $300 with the expenses of taking care of the puppy.