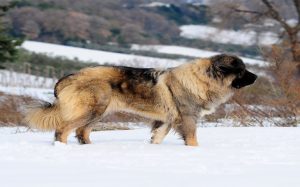 Caucasian Shepherd dog breed, due to its great size is very powerful. They are strongly muscled and heavily boned in proportion to their height.

This giant canine is featured with a large head, blunt muzzle with high hanging ears and deep-set, oval-shaped ears and a thick tail which hangs down on the hock.

The Caucasian Shepherd is one of the oldest breed, most ancient Molosser breeds. The origin of this breed is a bit of mystery. They were thought to come from wolves that were domesticated, while others believe that their ancestry includes Mastiffs and other breeds.

Many experts claim that these dogs are descended from sheepdogs who migrated from Tibet, but according to some modern archaeological evidence, the breed dates back to Mesopotamia.

These giant dogs were bred to guarded flocks of sheep and their owners from dangerous wildlife such as wolves, jackals, and bears. During their job, they need to be strong and fearless while being resilient to cold weather and harsh conditions

The dog shows, known as Caucasian Ovcharka, were created by the USSR during the 1900s mainly using the Caucasian Shepherd dogs.

Now, Caucasian shepherd dog is a fully standardized breed recognized by the major kennel organizations, including FCI, AKC, and UKC.

Despite their large size, the Caucasian Shepherds are very loving family pets. They are very loyal and gentle towards children, especially if raised together. But if not socialized properly since their early age, then they can be harmful to children.

While visiting children, they need a calm and proper introduction with known humans present.

As with any other dog, kids need to be supervised during play and teach on how to handle animals to avoid an incident.

The giant Caucasian Shepherd dog is assertive, strong-willed and courageous. They can be an excellent family pet unless properly trained and socialized early. These dogs are brave, alert and strong and can be aggressive toward people they don’t know.

They tend to show love and gratitude towards the people of his own family. He is very protective towards its family member including, the children, cats, and other pets.

The Caucasian Shepherd dog should not be left alone with children, because if the play becomes too rough, then he may feel the need to protect your child and may do it extensively.

These dogs are not for everyone, they require someone who knows how to show strong leadership and who can give them enough time in socializing and training

Training a giant dog-like Caucasian is no simple task, this intelligent breed should be trained properly as they are uncontrollable and can be extremely dangerous for new people.

They may be stubborn at times and may not show interest in learning things but as a leader, you must be in control at all times.

Positive training methods can help you the most, they don’t respond to harsh or abusive training. As they are proud dogs, they don’t take kindly to be beaten or threatened.

Facts for the future owner of Caucasian shepherds :

The Caucasian is generally a healthy dog with long-lived. Some dogs of these breeds may have some common health issues, such as:

The Caucasian Shepherds are found in different colors, such as:

These giant dog breed naturally give birth 5-10 puppies at a time. Puppies of this breed are born black and than gradually lighten. Caucasian pups start showing their natural aggression from the very first of their 3 weeks age. So it is essencial for you to socialize them the day they are added to your family.

Dogs similar to this breed are: