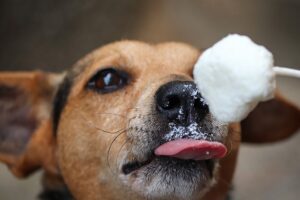 Some dog owners have a habit of offering everything they hold on their plates. However, a dog doesn’t know if the food will benefit them or not. So, being their guardian you must research properly about their food since many of it are very toxic for dog’s health.

Sour cream is very popular while topping, garnishing, or dipping foods, vegetables, fruits, and so on. It contains healthy nutrients when eaten in a moderate amount. Likewise, sour cream isn’t harmful or toxic for dogs as it benefits their health. So, how much sour cream to feed your dog? When and how to provide sour cream? Let’s find more about sour cream for your dog.

Benefits and Effects of Sour Cream

Sour cream contains 20 percent of fat while each serving has 13 mg of calcium. As calcium helps to build and maintain strong bones while calcium support to function properly. Although it’s not the best source of calcium, it’s better than nothing. Sour cream also contains a minor amount of vitamin A, iron, sodium, and phosphorous. Some sour cream also has probiotics that help to treat an upset stomach.

However, sour cream has its own demerit as it contains a lot of calories and fat that lead to obesity. If your dog is already overweight then sour cream can make things worse. It contains a lot of saturated fats that are not good for their health as it leads to many health problems. So, it must be consumed in moderation amount. Instead of taking risks, look for alternatives like lite sour cream, yogurt, peanut butter, and so on.

When to not feed Sour Cream?

Even though sour cream is safe for dogs, it mustn’t be fed to any lactose intolerant dog. As it’s a dairy product that will be hard to digest for them and may fall sick. It’ll start with uneasiness in the stomach and eventually lead to vomiting and diarrhea. Lactose intolerant is one of the common problems in dogs while growing from puppyhood to adulthood. In comparison to milk, sour cream has less lactose so, if your dog drinks milk easily then the surely can digest the sour cream.

How Much Sour Cream To Feed?

Since sour cream doesn’t contain any health benefits, feeding it in small and moderate amounts won’t affect their health. As sour cream carry a high amount of calories and fats, feed around 10% of calorie daily in their diet and don’t exceed their limit. If your dog is a small breed one spoon of sour cream is enough and if they are a large breed then 3 spoons can be considered.

What To Do If You Dog Eats A Lot Of Sour Cream?

If your dog somehow eats an excessive amount of sour cream then stay with them and observe closely for several hours. Although sour cream isn’t toxic there is no need to panic as it won’t affect their health. However, if your dog is lactose intolerant then they can experience mild diarrhea, dehydration, and vomiting. Avoid giving any treats now and fast them for over 12 hours. In addition, give healthy diets like boiled meat or chicken with rice. You also can take them to the vet for a proper checkup.

In the above article, we have mentioned all the benefits, effects as well as other queries about sour cream. So, add a small amount of sour cream to their diet and avoid it completely for dogs having lactose intolerant. If you want to add it to your diet then consult a vet as every dog is different.

Visit Doglime for more food benefits and effects on your dog’s health.