Skip to content
Home » Breeds » Catahoula and Labrador Mixed – What kind of Dog Breed is produced?

Catahoula and Labrador Mixed – What kind of Dog Breed is produced? 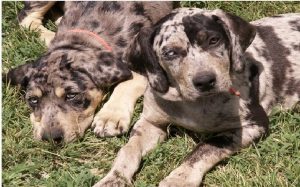 The Catahoula Leopard Dog is an American breed originating from Louisiana. This medium-large breed has a varied coat which gives an appearance like a leopard. It is the official state dog of Louisiana.

The Labrador Retriever or just the Labrador is the most popular dog breed of the United States. This retriever-gun is an energetic medium-large dog breed.

What happens if Catahoula and Labrador are mixed?

If a Catahoula and Labrador are mixed, a resulting breed named Labahoula is obtained. The Labahoula breed has a gentle nature of the Labrador and the physical agility of the Catahoula Leopard Dog. This breed has very sharp and attractive colored eyes with a leopard-patterned coat. Having a dominant personality, the Labahoula is popular as a loyal dog.

Temperament and Personality of the Labahoula Breed

The Labahoula has a very interesting mix temperament that it inherits from its parent breeds. It is a loving, well-tempered and gentle breed that does very well with children and other pets.

But for this, early socialization is very important. They are very playful, loyal and friendly with their families. However, their behavior towards other dogs and new people can be a bit different.

Talking about personality, the Labahoula has a very dominating and alpha-personality. To clarify, these dogs have a mind of their own and hence, will need to be monitored. Also, strangers should fear if the dog has not been trained and socialized well.

Being attached to their families, they’ll be aggressive and destructive if left alone in the house for long. Therefore, this dominant and loyal breed requires training with positive reinforcement from an early stage.

Is Labahoula good with children?

Yes, the Labahoula is generally considered to be very good with children. These dogs get along quite well with children of any age. But especially, they make a great companion with older children as they know and understand how to approach a dog.

The Labahoula comes from two intelligent breeds; the Labrador and Catahoula. And in their natural capacity as retrievers and herders, they take on commands and directions very well. Moreover, the Labahoula dogs may have a mind of their own which makes patience when training necessary.

Once, the dog achieves proper socialization, they’ll end up being a great family dog. However, keeping the training rewards-based and offering praise and treats will result in the desired output.

Facts about the Labahoula Breed

Health Issues of the Labahoula

Living a normal life of 10-14 years, the Labahoula is prone to a few diseases that are as follows:

Canine Hip Dysplasia is a condition arising from the malformation of the hip joints of the dog.

Cataracts is the condition of having a cloudy appearance on the eye lens with a disturbance in the vision.

It is a condition of being grossly overweight or simply fat. This disease can be seen in almost every breed.

A mother Labahoula gives birth to 6-8 puppies at a time. The normal price of a healthy Labahoula puppy is $800-$1200 USD approximately.