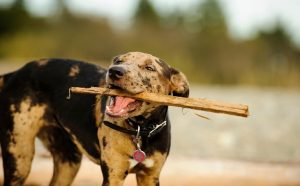 Known for his love to hunt wild boars, Catahoula Leopard is truly a hunting dog who is a happy canine when he’s given a job to do. He is a serious working dog, often known as “The King of The Stock Dogs”. They are easily recognized by their unique prints and crystal blue eyes.

These athletic dogs need at least one hour of exercise a day to avoid rambunctious and destructive behavior. Catahoulas are excellent watch dogs which can be a plus point if security is the main reason for a canine in your house.

Catahoula Leopard dogs were originated in Louisiana near Catahoula Lake. The word ‘Catahoula’ in Chocktaw Indian language originally means, ‘sacred lake’ where they were found. It is believed that they were bred between the local dog breed and Bloodhounds, Mastiff and Greyhounds.

They are also known as Catahoula Curs, Catahoula Leopard Curs or Catahoula Hounds. However, the name was officially changed after they became the state dog of Louisiana.

Yes! Catahoulas are also known as an excellent babysitter as they are best suited for families with children where they can have a good time playing and jumping around. As they need exercise it can be done by the children too by playing fetching games, balls and Frisbee. They can be a good playmate to children who how to make their furry friend happy.

But, you should be cautious in leaving your Catahoula with your toddler. As they are huge in size, they may unintentionally harm your child. Teach your pet how to approach a kid as well as your child on how to behave with a pet.

Catahoulas are very protective of their loved ones. They are wary of strangers. If your Catahoula senses something unusual he will immediately run in between to protect his family member or his territory. Early socialization is important for this breed to avoid behaviors like aggression and barking.

Catahoulas have a high sense of smell. If they smell anything in the yard or anywhere inside the house, he will become deaf and won’t hear your calls or commands until they don’t find what they’re looking for. They are sometimes stubborn and have a strong will of their own which can make training hard.

As Catahoulas were bred to hunt wild boars they are highly energetic as they can work continuously from morning to evening. Being highly intelligent they are hard to train since they will develop the dominant personality if they sense any lack of leadership.

Training is essential for Catahoulas and they are not recommended for first-time owners. They must be trained at an early age to avoid aggression and dominant personality. At least 60 minutes of training is essential for your pet to live happily or else if he will find something else on his own to entertain yourself and may become destructive.

Like any other large dog breeds, Catahoulas are also prone to have hip dysplasia. Not only the adult dog but 25 percent of the litter are also seen suffering from the hip dysplasia problem. To reduce the problem, puppies should have a minimum amount of exercise.

Deafness can be another major issue in the Catahoulas because they carry the merle coloration which is linked to deafness. Before buying a Catahoula Leopard puppy make sure you ask for the health reports from the breeders.

Adopting a Catahoula Leopard puppies will cost you around $300 covering the expenses of caring before adopting. However, buying a Catahoula puppy from a breeder is quite expensive as it will cost you somewhere between $600 – $2000 depending upon the breeder and the quality of the puppy.

Lastly, Catahoula wonderful dogs which will acquire personality of working dogs as well . The health issues and the behavior of the canine upon how you raise and train them.