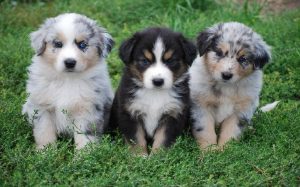 The Louisiana Catahoula Leopard Dog is a medium to large American breed with a distinctive eye and color patterns. It has various type of coat and appears to be like a “Leopard”. This breed is the official state breed of Louisiana.

As every dog breed, the Catahoula Leopard Dog also goes through a series of developmental phases before becoming an adult. Here is everything you need to know regarding the stages that this breed passes through:

The Catahoula puppies are born at a litter size of 8-12. At the time of birth, the puppies are blind and deaf having their eyes and ears sealed. Also, teeth development will not start yet.

The newborn puppies keep attaching with their mother and their littermates to be warm. Overall, this stage is a full development stage where various neurological changes will be taking place in the puppies. If possible, the vaccinations such as DHLPP should be given right after the puppies are born.

The newborn puppies are able to taste and feel the sense of touch immediately after birth. Additionally, the adorable pups are influenced hugely by their mother and are dependent on her for food and care. With limited movements, the Catahoula puppies are able to crawl slowly.

Starting with some exciting changes, this stage is something that you don’t want to take your eyes off. Firstly, the eyes and ears open allowing the puppies to have vision and hearing ability. Moreover, the puppies will be able to smell. And not to miss, teeth begin to appear on the gums. Overall, the Catahoula puppies are increasingly influenced by their mother and litter-mates.

Socialization Stage is the most important stage of the Catahoula puppies. It begins from the 4th week and will continue throughout their life. The puppies will require chances to meet new people and other dogs. Furthermore, they will be aware of the surroundings and will explore on their own. Influence of siblings will increase and play becomes important.

The Catahoula puppies will learn social skills and learn the play bite. Curiosity increase and they’ll need interaction with new people and canine pals. The puppies will go through a “fear” phase from 8th to 10th week. So, to control this, positive interaction and training should be given.

Regarding the vaccines, the puppies should be given vaccination of Canine Distemper, Measles and Parainfluenza when they are 6 to 8 weeks old. Further, at the time of 10-12 weeks, the pups need to be vaccinated with Distemper, Hepatitis, Parainfluenza, and Parvovirus.

The Ranking Stage is the time where you’ll need to have control on your puppies. The Catahoula Puppies will learn Ranking (dominance and submission) and use them with their family and pack. The pack of the pups become extremely influential and will behave according to their mates.

The Catahoula puppies will start chewing and mouthing habits as teeth development are complete. Sandals and shoes should be kept away from them. They’ll go through another “fear” phase at the 4th month. So, the owner should prepare themselves to introduce their pet with objects and situations. For this, positive reinforcement is the only way to succeed in it.

When the puppies are 12-24 weeks, they’ll need vaccinations for Rabies. And when they reach 6 months old, they’ll need to be vaccinated with Leptospirosis vaccine. This vaccination should continue at an interval of 6 months.

It is the stage where the Catahoula puppies will develop behaviors and personality as an adult Catahoula. The pups will be under the huge influence of their pack and will desire a dominant position. Because of this, they will start challenging their owner for the authority of the leader.

The Catahoula puppies will begin to explore more and more of their territory when they reach 7 months. Sexual behaviors and activities are likely to arise if not spayed or neutered. The puppies will require repeated vaccinations of Rabies and DHPP when they are 12-16 months old.