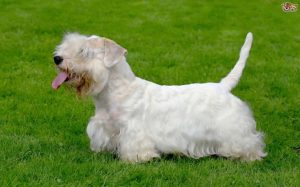 The Sealyham is a funny and active terrier who is always ready for action. They are very curious and happy to investigate and devoted to their family.

Like other terriers, the Sealyham Terrier is very brave and spirited, they are quite sturdy and enjoys being outdoors. They are often recognized by their “fall” the large amount of hair covering their forehead.

The Sealyham is one of many breeds that developed in the middle of the 19th century. The Sealyham was originated in Wales by captain John Edwards.

Yes, Sealyham Terrier is easy going with children, especially with the older ones who know how to handle them. They may not be the best choice for families with small children or toddlers.

Any interaction between small children and dogs should always be well supervised by an adult to make sure their playtime doesn’t become boisterous which could result in someone being knocked over and get injured.

The temperament of Sealyham Terrier is alert, calm, fearless, friendly, intelligent and even-tempered. They are very gentle and relax breed but at times they love to hunt. They are possessive when it comes to their people and property and can be aggressive to other dogs and pets in their homes.

The Sealyham is very well-tempered which makes them well-suited to city or country life. They don’t bark unnecessarily although being alert by personality. They are probably welcoming to the guest.

The Sealyham is very active by personality and loves to explore and learn new tricks. They are very hard-working and can be strong-willed. They are very loyal and loving with their families and make good watch-dogs.

Training a Sealyham terrier can be difficult as they are independent. Therefore they might not be suitable for a first-time dog owner.

Training a Sealyham requires patience and would be easier if you are using firmness, consistency and positive reinforcement techniques in their training. They are quite stubborn, so make their training fun and short as much as possible so that they don’t get bored easily.

Quick facts about Sealyham are:

Like all other breeds, the Sealyham terrier prone to suffer from some common health issues, which include:

The Sealyham are found in Five Color Patterns, such as:

Which Dogs Similar To?

Dogs similar to Sealyham Terrier are: