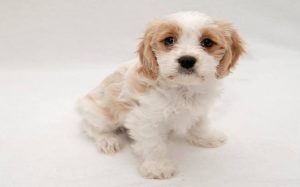 The Cavachon is a designer dog that is created by mixing Cavalier King Charles Spaniel and Bichon Frise. It is a designer breed whose exact origin is believed to be in the US. It is a small-sized dog that is full of life making an excellent companion for the family of all age members.

The appearance of the Cavachon varies from the genes it gets from its parents. The coat is dense that can either be silky or slightly wavy. The eyes are big and ears are long and floppy.

Temperament: The temperament of the Cavachon is lively, fun, and friendly. The temperament mostly depends on the traits it inherits from its parent breeds. It is playful and loves to spend most of its time with its people playing. When it is not playing, it likes to sleep on the lap of its people or on the couch.

Behavior: Cavachon forms a strong bond with its people. They always need someone by their side so if there is not a single person at the house, it is best not to own this dog. They suffer from separation anxiety if left alone, so even a pet to keep them a company is a good idea.

Personality: Cavachon is a very sweet dog that has a very low barking tendency. They are not likely to bark even if a stranger approach which makes them not a very good watchdog. Although, due to their sweet personality, they greet guest and friends in the house very warmly.

The Cavachon is very friendly with children of all ages. They love the company of kids as they are playful, fun like them. Although Cavachon is a child-friendly dog, their interaction with kids should be always supervised as kids sometimes play rough hurting the dog. Therefore, teach your kids to be gentle and loving with dogs.

Training Cavachon needs a lot of patience as they can be very stubborn sometimes. A firm leadership at an early age is necessary to make them obedient and patient. They tend to respond well to a positive method of training, so provide them with delicious treats and lots of vocal praises.

Treat them with kindness and love but never be harsh and forceful on them. They might become aggressive or scared.

Cavachon is generally a healthy dog but it can inherent genetic health problems from its parent breeds. It can face the following possible health problems:

The Cavachon Dog comes in following colors and markings:

Cost: The average cost of the Cavachon puppy is between $800-$1600 which depends on the breeders quality.