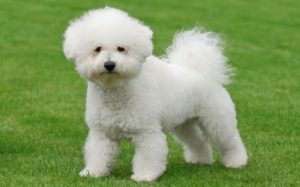 With a compact body, fluffy white hair and baby-doll faces, Bichons are very appealing dogs whose looks are intensified by a perky and good-natured disposition.

This little puffy dog is somewhat longer than height. They are adorable little dogs with a head that is well-portioned to their body, a plumed tail which is carried over back, ears that are dropped and a cute little nose which is pronounced and black in color.

The exact origin of Bichon Frise is still a mystery but it is said that their are from Canary Island. They were thought to be the descended of Barbet (a medium sized woolly water dog ). The name Bichon is derived from the word Barbichon which is a miniature of Bichon.

The Barbichon family of dogs includes Bichon Frise, the Bolognese, the Coton de Tulear, the Havanese, and the Maltese. All these dogs were originated in the Mediterranean region and got similar looks.

Dogs of this breed were bred to travel as the companion of Spanish sailors, who have used them as items of barter.

These cute little dogs were quite popular with European nobility, in the English court during Henry II’s reign, and were even included in paintings by Goya.

But by the end of the 19th century their popularity started declining, they became street dogs and somewhere used in circus troupes. But again after World war I the breed started gaining popularity.

Are they child friendly

The sweet little fluffy dog has a natural affinity with people and therefore they generally get on well with children thanks to their playful and fun-loving personalities.

It is important to supervise any interaction between dogs and the kids an adult to make sure playtime does not get too boisterous which could make a child being frightened or can injure by accident.

Bichon Frise is the highly adaptable pet and is considered a great all-around pet who is both playful and gentle. They get along with other dogs and pets well.

They are similar to poodles in terms of their powder-puff coat which consists of silky coat but curly from outside and silky from inside.

Bichons are excellent dogs for first-time owners, they are always happy and eager to please and will happily accompany you on walks, runs or Sunday drive around town. They bring smiles wherever they go.

These dogs are very easygoing, they love people of all ages, go well with children and always enjoy to be around people.

Separation anxiety is common in Bichons. They love to be around people and if left alone for too long they become anxious which can result in chewing and over barking, but proper training can prevent this.

Bichons are barkers and have a high-pitched bark but their bark is not aggressive, they just want to alert everyone that a new person is arriving.

Bichon Frise is quick-witted little dogs which makes them easy to train but their training must be consistent. Giving them whatever they want can raise unwanted behavioral issues. Let the Bichon know the boundaries and limits, and then they can be easily taught to be .

If they are allowed to get away with too much, a Bichon being so clever would soon take on the role of alpha dog which often seems to be harder to manage like before because they develop a condition known as “small dog syndrome”.

The average life expectancy of a Bichon Frise is between 12 to 15
However, like so many other pure breeds, they are known to suffer from certain health issues which include the following:

Bichon dogs are found in four different colors, they are:

If you are looking own a Bichon Frise, you would need to pay anything from £500 to over £600 for a well-bred pedigree puppy.

Dogs similar to Bichon are: