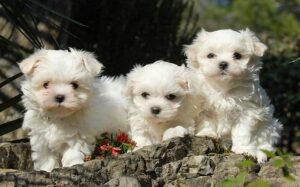 The Coton de Tulear is a small breed of dog named after a city Tulear in Madagascar. It is a very adaptable dog that gets along with almost everybody. This breed also gets well with kids if they both are raised together.

The Coton de Tulear can give birth to 4- 6 puppies at a time. The development process of the puppy is fun to watch. The physical changes, behavior changes are all part of their development.

When the Coton de Tulear puppy is born, the eyes are tight shut, its is not able to hear, and have no teeth. The only sense the puppy have is of taste and touch through which it gets to the mother. The mother only leaves her puppies when she have to eat and go to the toilet.

In this stage, all the puppy do is eat and sleep. Make a clean and cozy place for the puppy and its mother. The activity of its brain while awake or asleep is the same as it will not function until the puppy is few weeks old.

The first two weeks of the Coton de Tulear puppy’s birth is known as the neonatal stage which is a very vulnerable period for him. Their eyes and ears are closed so use the sense of smell and touch to get to the mother. The puppies are unable to produce their own body heat during this week, so the mother keeps them warm and cozy. Do not separate the puppies from the mother as they might die of hypothermia.

In the second week of the puppies, you can see they are able to open the eyes. Their muscles and bones get stronger due to the constant crawling to get to the mother. By the end of the second week, the puppies get double it’s size of the birth.

During the transitional period, a lot of physical, mental, and behavioral changes can be seen. By 2-3 weeks, they are able to see and hear completely. The Coton de Tulear puppies start to stand, sit and move a little around with their wobbly walk. You can see them attempting to the first bark. They are also able to generate their own body heat.

By the fourth week, the puppies are much more active running and playing with their littermates. The puppy teeth start to break out and they will try solid food for the first time from the mother’s bowl. They now don’t need stimulation from the mother to pee and poop.

In this stage, the Cotor de Tulear puppies are quiet noisy since they are able to bark properly. It is a right time for basic obedience training as they are able to soak up information. teach them with basic tasks like sit, come, stop, etc and also give them a proper potty training. Since the puppies have control over their bladder and can hold in between the potty break, potty training can be easy.

Between 8-12 weeks, it is the perfect time to introduce your Cotor de Tulear puppies to the outside world. Take them to the park and introduce them to different people and dogs. The positive interaction with various people and dogs plays an important role on how your puppies continue to interact.

The Coton de Tulear puppy at this stage has lost its puppy face and looks more like a younger version of its adult self. The growth plates starts to close up while sexual maturity is developing. Provide him a good quality dog food with the the required nutritient for its age. Feed 3 meals a day and keep a clean and fresh water by his side.

Around 4 months, the baby teeth of your puppy starts to fall out so they start chewing and teething any stuff they find. Therefore, invest in chewable toys so the puppy does not destroy any valuable thing. Continue the training of basic tricks and commands while also socializing them with people and other dogs.

At 6 months old, the Cotor de Tulear puppy complete its growth and it is an adult now. Both male and female are now sexually active since the female experienced her first heat and the male starts showing interest in females. However, breeding at such a young age can be unhealthy for the dog, so wait till they are 15-18 months old.

You can start giving them agility training and involve them in other activities. They can show behavioral problem and lose focus on training which is a normal part of their growth. Be a firm and consistent leader, give them lots of praises and treats to motivate your pooch. Switch their puppy food to adult food and decrease their meal time to 2 meals a day.