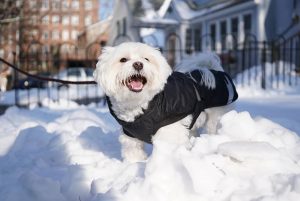 The Coton de Tulear is a bright cuddly breed of dogs that has a clownish personality and is always ready for a fun time. It was originated in Madagascar and is also known as the “Royal Dog of Madagascar“.

The small-sized Coton de Tulear is sturdy despite its small size. It is affectionate, playful and always eager to please humans around him.

The Coton de Tulear originated or is believed to have come in several years ago relating to the Bichon breed.

The Coton de Tulear survived in packs in the wild, later to become a companion dog of the native Malagasy and Merina, the tribal nobles of Madagascar.

There are stories and tales that white dogs swam ashore for safety and formed a feral pack. Then they mated with little white dogs which resulted in the Coton de Tulear.

People believe that the little white dogs either accompanied ladies on long sea rides or used as ratters on the ships. They were also beached on Madagascar after being the sole survivors of a shipwreck.

Some of those dogs became pets in the royal court and wealthy Madagascar households, while others were street dogs.

Yes, Coton de Tulear is very much child-friendly. The breed is very affectionate and kind with kids of all ages. If you are willing to bring a new mate for your kids, then the Madagascar’s royal dog is perfect for you.

The Coton de Tulear has a very playful, affectionate and intelligent temperament. He’ll form strong bonds with people he loves and trusts. It is a very happy and boisterous dog breed. He behaves very kindly and is always eager to please the people he is around with.

The Coton de Tulear has a small-sized but interesting personality. He loves lounging around here and there pleasing and cuddling his owner.

The Coton de Tulear is a very smart breed that learns things very quickly and accurately. However, he may become destructive if not properly trained. So, training should begin at an early stage.

As a owner, you can start training him from your home itself. You shouldn’t miss to train him with obedience training. Also, socialization with other dogs and human at early age is equally important.

Here are some facts about the Coton de Tulear breed that you would want to know as an owner:

Some Common Health Issues of the Coton de Tulear

The Coton de Tulear has an average life between 14 to 16 years and during his lifetime, he suffers through various health problems. According to Petful, here are some of the commonly seen diseases seen in the Coton de Tulear:

Hip Dysplasia refers to the hereditary disease seen in the dogs caused by the malformation of the hip joint.

Luxating patella is just a minor inconvenience which causes pain severe enough to stop the dogs from running and jumping.

The Coton suffer through various skin allergies due to its unhygienic behaviors. They are likely to get rashes and other minor skin infections.

The Coton de Tulear dogs are found in six different colors. They are as follows:

If you are willing to own a Coton puppy, it is very important to keep your house and surroundings puppy-proofed. Electric wires and cables should be properly managed. Vaccination should also be given timely.

Be sure to train your puppy from the time you bring him home. Obedience Training, Potty Training and Socializing are very important aspects for training your puppy.

Some breeds that are similar to the Coton de Tulear are as follows: