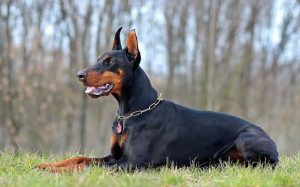 Doberman Pinscher, Dobermann or Doberman was originally from German and given a name by his creator Herr Karl Friedrich Louis Dobermann. It is known as the perfect guard dog due to his strong physical appearance, excellent sense of smelling and amazing amount of courage.

Dobermann is an intelligent and active dog with a height of 24-28 inch and weight around 30-40 kg. Loyal, alert and fearless Doberman instinctively protect their people. Training Doberman is not as hard as they are smart and obedient. Though Doberman is known as the guard dog, war dog; they are a great companion and true friend too.

Fearless and Protective Temperament of Dobermann

Doberman was bred to be fearless and aggressive as they were trained to guard property and were taken to war. It is known as the most dangerous dog in the canine world.

Nowadays, Doberman is bred to be loving, gentle, playful and obedient. Despite its dangerous looks, it is a loving, gentle to its people. They like to play with children, kitten, and love to chase things.

Trainability is another important part of Doberman’s temperament. They are very good at catching command and are obedient. Due to their aggressive behavior sometimes, it is important to train them to calm down when command.

Doberman is an athletic dog and known as one of the smartest dogs in the world scoring high in the intelligence test. . Doberman is joyous when they are given a job to do. They are best suited to work for military, security office and police officers.

The breeding of Doberman has a great influence on their nature. Some are shy and sweet while others are aggressive and fierce. Therefore, early socialization can make an important difference in both ways of breeding. So while buying a Doberman, you have to make sure and know from what tempered patents they were bred.

Doberman likes to be around their people most of the time as they are athletics and wants to play and exercise more often. If they are left alone then they might get anxiety. They do not get enough physical and mental exercise which results in continuous barking and chewing things around the house.

They are happy when they have to do and keep their brain sharp. So, if you are a very busy person and do not have to take Doberman outside to play and exercise then they are not for you.

Loyal and Protective Personality of Doberman

The personality traits of Dobermann will vary from each dog. Some are friendly and extroverted, while others are reserved and shy. Regardless of this, all Doberman are loyal, true friend and extremely protective of their family members. They like the companionship of people and love to be around them most of the time.

Doberman is best known for its guarding personality and protective nature. They are fierce and vicious looking canine. If they sense any danger and harm upon their family, they come forward to protect them from any kind of danger. They should be trained properly so that they would only attack their master’s command and not attack any strangers.

Doberman is not a kind of dog whom anyone could take home as a pet. The owner should be experienced and have a good amount of knowledge about their behavior and nature. So, if you are going to get a Doberman, you should know a lot about their habits, likes, and dislikes.

Well trained Doberman should be bought and if you buy a puppy, you should start training him his early weeks. They should be trained along with the children so that they don’t harm them.

Letting Doberman play with children is somewhat risky but with proper training and proper raising them with children, they can be a great protector and playing friend for children.

Doberman is very suspicious and shows aggression towards strangers to defend their owner. Early socialization is needed to avoid his aggressive behavior. Let your dog himself approach to the stranger first and sniff them. This is his way of knowing that the person is of no harm.