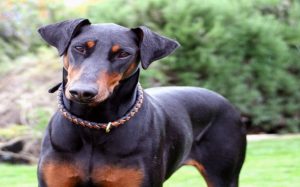 With lots of energy and the Doberman Pinscher is considered to be a powerful and active dog that needs plenty of exercises to keep them fit and healthy.

It is believed that the Doberman Pinscher is the mix of many breeds which includes Rottweiler, German Pinscher, Great Dane, a German shepherd dog, Manchester terrier, and English greyhound shorthaired shepherd.

Although they were originally bred to use as guard dogs, now they have been used for military, rescue and therapy dogs as well.

Doberman Pinscher known to be one of t dogs, they can be trusted around children as long as they are treated kindly. They make great companions with children, but it is essential to supervise your children around dogs.

Due to their heavy size, they do best with older children, that cannot be knocked down easily.

Doberman Pinscher has a fun-loving temperament, they are considered to be people-oriented dogs that love to be around its family members and involve in family events. But apart from that some of them are very dominant and aggressive toward other pets.

They are affectionate and loving with people if properly trained and socialized.

They have a very loyal personality as compared to other breeds, they quickly become a trusted and important member of the family. A Doberman Pinscher is a fearless breed that makes great watchdogs too, they have an instinct to protect their own ones with intruders.

Training a Doberman Pinscher is not that difficult, as they are very intelligent and intuitive dogs. They are very smart and eager to please dogs, and that’s what makes them highly trainable.

Dobermann responds very well to dog training and quickly pick up commands. Their training should be consistent and as owner, you should establish sturdy leadership and dominance. Positive reinforce, offering treats will help you the most.

Doberman Pinscher is prone to certain health issues, such as:

Doberman Pinschers are found in various colors, such as:

Which Dogs Are Similar to Doberman Pinscher?

Dogs similar to Doberman Pinscher are:

Visit Doglime For More Dog Breed Information and their behavior.