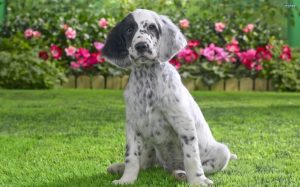 The English Setter is gorgeous and elegant dogs with white coat flecked with tan, orange, blue or black. These dogs have an exceptional sense of smelling and memory.

Among the three Setter breeds, these breeds are the smallest weighing between 35 to 80 pounds. So, if you have decided to own an English Setter then here are things you should know about the elegant hunting dogs.

The English Setter date back to the 14th century and it is believed that they were bred crossing between the Pointing and Spaniels breeds. These dogs were bred even before the guns were developed for hunting as they were experts in crouching and setting birds. However, their skill of crouching helped ensure that they weren’t shot accidentally.

English Setters are known to be calm and protectiv of children. They are energetic dogs which makes them the best play-mate to kids who can play and jump whole day without getting tired.

But keep in mind, you should always supervise your child while playing with your pet since they can accidentally hurt your baby.

The English Setters are one of the most special dogs with mild-mannered and even temperament. Although bred as hunting dogs, they are also wonderful family dogs having gentle, protective and affectionate nature.

They love spending time with their loved ones and are happiest when they get a chance to participate in family activities. English Setters crave for human company and don’t like being alone. It may lead to separation anxiety if they are left alone for longer periods.

The English Setters don’t bark without a reason, so, if your furry pet barks get ready to check everywhere. They are alert dogs but they make poor watchdogs since they will wag their tails even to strangers when they’re introduced nicely.

They are one of the most sociable dogs, who gets along with every other dogs and pets but you should protect your pet birds as they were bred to hunt them.

This medium-sized dog needs a lot of daily physical and mental activities for healthy development. They enjoy long walks, playing fetch games, running, and socializing with other animals.

English Setter is highly intelligent and smart however, they might try to manipulate you if they sense any lack of consistency and leadership. They are sensitive and will get stubborn if treated harshly. English Setter has a very good memory and if someone treats them poorly they won’t forget them their whole life.

You should start training your Setter as early as possible. Because of their good memory power, they should be taught about the difference between good and bad habits.

Deafness: Deafness is a common problem in a canine as they age. It cannot be treated or healed. However, you can provide your pet things like vibrating collars which you can use to call your pet making your and your pet’s life easier.

Hypothyroidism: Hypothyroidism is a disease that is caused by producing a low level of hormone by the thyroid gland. The symptoms of this condition are obesity, low energy levels, mental dullness, and dropping of the eyelids. It can be treated with daily medication which should be continued throughout the dog’s life.

Some Facts About English Setter

The even-tempered dog, English Setter makes an ideal pet for owners who love the company of canines and also for those who love going hunting.

Click on Doglime for more dog breed information. and their behavior.