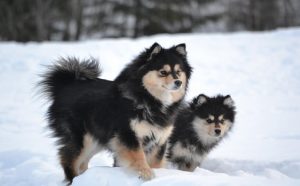 The Finnish Lapphunds are medium sized dogs who are agile, alert, active and noisy as well. The Lappie are often referred as clown dogs with their calm and eager to please personality.

Wondering about where did they come from? Then there is some information regarding this elegant dog breed from their personality to the origins of the Finnish Lapphund.

The Finnish Lapphund is a Scandinavian breed originated in Lapland, an area which covers the part northern part of Sweden, Russia, Norway, Finland. They were bred as hunting dogs by the semi-nomadic people known as Sami.

Later on the hunting dogs became the herding dogs. They were used to herd large number of reindeer for hundred of years. However, with the snowmobile in modern times these dogs became less necessary to herd reindeer.

In 1940, aficionados in Finland decided to standardize and protect their breed. The Finnish Kennel Club (FKC) recognized the “Lapponian Shepherd Dog” in the year 1945 with both varieties one with long hair and the other with short hair. Finally in 1967, the two different coat type dogs were separated into different breeds; the long haired dogs were known as ‘Lapinkoira’ (Finnish Lapphund) and the short haired dogs were called ‘Lapinporokoira’ (Lapponian Herder).

Yes, Finnish Lapphunds are child-friendly and they are clever enough on how to handle a child. The Lappie are energetic dogs which will make a good-playmate to kids. Both the kids and Lappies will become noisy while playing which will make your house not less than a circus.

But, you should always supervise you while playing with your dog. It may accidentally hurt your child while playing.

Even Tempered And Loving Personality Of Finnish Lapphund

Despite of being a huge dog, a Finnish Lapphund are very calm, affectionate and versatile breed. These adaptable animals thrive in almost every environment and likes keeping their loved ones close with them and aloof around strangers.

Finnish Lapphund are ‘all-around’ dogs with calm and eager to please disposition. As being herding dogs, these breed are prone to have separation anxiety when left alone for long period.

Because they are so sensitive and lovable, a Finnish Lapphund makes poor guard dogs as they will treat strangers wagging their tails once they are introduced nicely.

The Finnish Lapphund needs to be trained both physically and mentally to get healthy. Lappies are easy to train and quick learners when treated nicely.

As being a herding dog, these breeds are known to observe and analyze the situation before taking actions. They will need long walks with lots of interactive games to be happy. As a tired dog is always a happy dog.

Finnish Lapphund are known to have some health issue such as-

Cataract is suspected to be hereditary disorder. Cataract is the formation of opaque bodies in the lens of the eye. If not treated in time, it may lead to visual impairment.

Finnish Lapphund are prone to suffer from glycogen storage disease which is a rare condition in which excessive deposits of carbohydrate build up in various tissues.

Finnish Lapphund are known to suffer from the PRA as they age which leads to blindness.

The Finnish Lapphund are found in six different colors-

The male Finnish Lapphund stands from 18-21 inches whereas female stands from 16-19 inches. The Lapphund weighs up to 33-35 pounds.