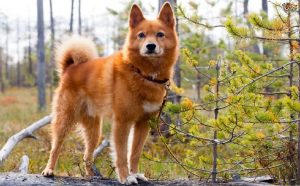 With the fox-like appearance, the Finnish Spitz is the Northern breed with small erect ears, dense coat, and curled tail. They are cheerful and intelligent dogs which makes a good family breed.

If you want a dog who is medium-sized and makes alert watchdogs then Finnish Spitz are right for you. But before owning one, you should know about their personality traits as well as their history and why they were bred for.

The Finnish Spitz was originally tribal dogs used of hunt squirrels to bear. Later, they became popular hunting game birds called capercaillie and black grouse. Because the tribes migrated over time they used to breed their dog according to the familial and geographical needs.

Due to the change in transportation and roadways, people started migrating to the land where Finnish Spitz lived and began mating their own dogs with Finnish Spitz however, they were close to extinction.

In 1890, several hunters and foresters saw the pure breed of Finnish Spitz during hunting and returned home with several specimens in hopes of retrieving the breed.

One of this early colonizer, Hugo Ross and Hugo Sandberg from Helsinki saw the breed hunting and decided to save the breed. Hugo Ross bred the dogs for 30 years. Similarly, Hugo Sandberg wrote an article for th edition of the Sporten Magazine about the dogs he’d seen.

In 1892, The Finnish Kennel Club officially recognized the breed and was given the official name “Finnish Spitz” in 1897. In 1927, the first-ever Finnish Spitz arrived in England and were popular enough to warrant registration with The Kennel Club Of England.

The Finnish Spitz Club of America was founded in 1975 and was accepted into the American Miscellaneous Class in 1983. Similarly, in 1988 the breed became eligible to compete at AKC-licensed events as the non-sporting group.

Finnish Spitz loves the company of a child as they need people who can spend most of the time with them. A house with children is the best place for a Finnish Spitz. They will get along perfectly and are likely to play the whole day.

Even more, they are very gentle and tolerant around kids rather walk away if they had too much. Your Finnish Spitz won’t act aggressively or become irritated with children. They know how to behave with a child. With Finnish Spitz, your child is safe and sound.

Finnish Spitz is a wonderful family dog. They are easy-going dogs and can be trusted around strangers and other dogs. They are very protective towards their family and territory and despite their independent nature, they love being between their favorite person and are happiest when getting a chance to participate in family activities.

In Finland, these breeds are known as “Barking Bird Dog” since they bark a lot. A lot means a lootttt! which can make your neighborhood go crazy. Your Finnish Spitz is prone to suffer from separation anxiety which can be one of the most important reasons for your dog being barkers.

Early socialization is a must for Finnish Spitz. They are reserved with strangers and if not checked properly they can develop behaviors like shy and timid. Introducing to new people and animals will help them stay healthy both physically and mentally.

The Finnish Spitz aren’t lazy dogs. They need vigorous exercise every day in order to avoid boredom and anxiety. Their independent streak often makes training hard. The Finnish Spitz easily gets bored with repetitive sessions so the trainers need to keep the training sessions short by mixing up the routine.

You should be very calm while training your Finnish Spitz as they don’t respond well to discipline. However, once they have mastered the basic commands, they should be sent to advance obedience classes and agility training.

Finnish Spitz are generally healthy breed, but like all other breed they are also subjected to have some common issues as they age. Some health problems are as follows

The Finnish Spitz can suffer from Epilepsy a seizure disorder. It can be treated with medication but not cured.

Finnish Spitz can suffer from Hip Dysplasia which is said to heritable condition in which the thigh bone doesn’t fit on the hip bone.

Patella is a kneecap both in human and dogs. Similarly, luxation means dislocation of an antomical part. Patella luxation is caused when the knee joint slides in and out causing pain.

The Finnish Spitz will give birth to an average of 3-6 puppies at a time. If you want to buy a Finnish Spitz puppy then will cost you between $500 – $700 depending on the breeder and the quality of the breed.

The Finnish Spitz stands up to 15-20 inches weighing an average to 31-35 pounds. Whereas the female will stand 2-3 inches less than male weighing 25-30 pounds.

Which Breed Are Finnish Spitz Similar To?

Above all, Finnish Spitz are the most wonderful dogs you can ever have in your family. Their protective nature and keeping their loved ones near will make you and your canine to live happily.

Visit Doglime For More Dog Breed Information. and their behavior.