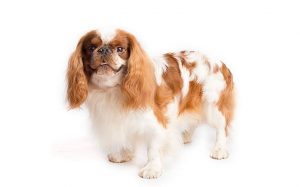 English Toy Spaniel a small-sized dog with long flowing hair. They have a short nose, an expressive face, round head and luster eyes. They are playful and highly affectionate who like to cuddle and sit on the lap. The average height of the English Toy Spaniel is 9-10 inches and the average weight is 8-14 pounds.

English Toy Spaniel is a lively dog and they have a hard time to focus on one particular task for a long time. So, training them can be quite tough job to do. Therefore, while training a English Toy Spaniel, you should keep few things in mind like when, where and how to train.

When to Train?: Start training your English Toy Spaniel from its puppy-hood. The right age to train your puppy is between 9-10 weeks. At this age, their mind is developed enough to learn some basic task. Start with some basic training like housebreaking, socialization and respecting the owner. At the age of 2-3 years, when he has fully learned the basic tricks, help him with some advanced training.

Where to Train?: English Toy Spaniel is better if trained in an open and less crowded place. Crowded place with many people and other canines can be distracting for them. You can even train in a room with only two of you. Always train your English Toy Spaniel in the same place so he adopts the place. However, changing spot can be confusing for him and he will take time to adopt in that place.

How to define task for your pet?

Defining a task is hard as you have to choose a good word to use so that your dog understands what you are commanding. Use some short words to define a task like sit, up, lay down, stop and so on. They will be quick at learning short words. However, after setting a certain word for a task, do not change the words as it will be confusing for your dog and even forget all the words before.

When you are defining a task for your dog, use hand gesture too. English Toy Spaniel will be quick at catching the words that include hand gesturing. Wave the finger up to command him to stand and wave down to make him sit. Likewise, make your own sign for a particular task and train him using those gestures.

Positive Reinforcement: Positive reinforcement is a key to encourage your gracious English Toy Spaniel. Reward him with lots of word praises, treats and encouraging pat on his back. They respond well to rewards and it also keeps them motivated. However, do not use lots of treats as they might only listen to you when you have treats on your hand and also they may suffer from obesity.

Firm Leadership: Like any other canine, English Toy Spaniel also needs a leader who can instruct him well. Be a gentle and confident leader so that he can rely on you. Don’t be harsh on him as it may scare him and he will become defensive. Be a leader, he can respect and depend upon.

Socialization: Expose your English Toy Spaniel to the variety of people at an early age. Socialization is necessary to train them to be friendly and also to make them understand about good and bad people. Socialize them with both canines and people with proper introduction.