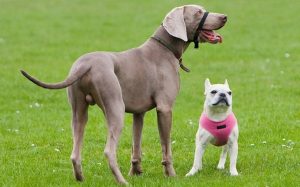 From short to long, puffy to curly, they are all different. You might know that your four-legged pal wag their tails because they are happy. But, is that the only reason?

We know that the dog’s tail is only one way to communicate. But do you know that their tail can convey other messages too?

1. Direction of Wagging Means Something

Similarly, right wagging indicates happiness and means they are approachable whereas left wagging means anxiety or fear. When wagged left, it should be approached with caution.

2. Tail Chasing Could Be A Problem

We find it funny when we see our dog chasing its tail. But is he doing just or entertain us or is there anything serious he’s going through?

Yes! he’s having some issues. The reality is that it is an indication of a deeper problem of OCD which means Obsessive Compulsion Disorder and needs to be treated as soon as possible.

3. Their Tail Helps Them To Spread Scent

4. Wagging Is a Learned Skill

Your dog won’t wag its tail until they are more than a month old, as far as you’ve noticed. It is a learned skill to communicate with their mother and siblings.

Tail wagging is the only means of communication to communicate with your furry friend. However, a broad swishing is indicated as friendly and unchallenging, where as a slight swish means, ‘wait and see’.

A slow wag of a tail is taken as neutral neither excited nor anxious. But a high sitting tail making rapid back and forth motion can be taken as a threat.

More than communication, your pooch’s tail also helps to maintain the body balance. As per the animal experts, the tail is evolved as the way to help dogs keep when walking through the narrow paths.

So these were some amazing facts about the dogs tail you probably didn’t know about it.

Click on Dog Lime For More New Updates About Dogs.