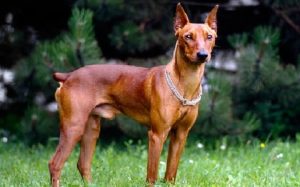 German Pinscher was originated in Germany as a working dog that used to hunt rats and vermin on the farm. It is a medium-sized dog that was originally known as German Dutcher. It is a very energetic dog that needs a house with a yard for them to roam around.

German Pinscher looks like a smaller version of Doberman Pincher with high-set, erect ears, sharp and alert expression. They can become an excellent companion for an active family due to their friendly and gentle behavior.

The temperament of the German Pinscher is active, alert, and devoted. They are very active, so they are only suitable in a house with active members that can take them for a long walk, hiking, and other canine sports.

They are very alert of the activities going on in the area and they will bark to warn their owner if they sense anything unusual. So, German Pinscher makes an excellent watchdog for a family.

German Pinscher thrives on the attention of its people. They need attention and love from their family. If they do not get enough love and care, they become destructive and anxious. So, provide them with enough attention and do not leave them neglected.

Personality of the German Pinscher

The personality of the German Pinscher is fearless, intelligent, and territorial. They are not afraid to face anything and are always ready to protect their territory.

As an intelligent dog, they need something to occupy themselves for mental stimulation. So keep them mentally challenged otherwise they will find their own way to be occupied by digging your yard and scratching your furniture.

Training German Pinscher is not a very tough job as long as you are an experienced trainer who can train them with the firm and consistent training.

Use positive methods of training by rewarding them with lots of vocal praises and delicious. This will keep them motivated and encouraged to be focused on the training. Do not treat them harshly and always be gentle with them.

Yes, German Pinches gets along with children pretty well. They do not tolerate harsh behavior so it is best to keep them in a house with older kids who know to behave around dogs and handle them gently.

Always supervised their interaction so there is no harsh behavior from either party. Teach your kids to be gentle with them and be loving.

How Does German Pinscher Behave Around Strangers?

German Pinscher is suspicious of strangers and they do not trust them easily. They tend to bark at them if they see one approaching them and their territory.

Early socialization should be done to make them get along with visitors at home. Therefore, at a young age, socialize them with a variety of people.