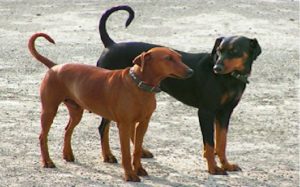 German Pinscher was developed as a working dog used for hunting and killing Vermin. But today it has proved himself to be an all-around kind of working dog. It works as a service dog, therapy dog, and as a pampered pet which enjoys the comforts of family.

German Pinscher dogs are completely, utterly, and permanently devoted to you which makes them an excellent guard dog. Despite an independent streak, he likes to be in the middle of the family activities, right there with you.

The German Pinscher was originated in Germany somewhere between the late 1700s and 1800s. There is no clear evidence of when he was developed but a that dates about 1780 portrays a dog similar in appearance to the German Pinscher.

Yes, German Pinscher dogs are child-friendly because they well with children if brought up with them from puppyhood. Because of his friendly nature, he does best with older children, preferably those over the age of nine. An older German Pinscher who is unfamiliar with children will probably do best in a home with kids who are mature enough to interact with dogs.

Always teach the children how to approach German Pinscher dogs. Proper supervision is necessary between the children and dogs. Never let your child pull the ear or tail while the dog is sleeping or taking rest. This makes them angry and can bite the dogs.

The behavior of German Pinscher is strong-willed, devoted and in need of a consistent owner. He can take over a home if rules are not set when he is young. With training and consistency, German Pinscher learn quickly. He is an excellent guard dog and is suspicious of strangers.

The temperament of the German Pinscher dog is affected by the training you give to them. One thing you should know about this breed is he has the tendency to jump up when greeting family and friends. Start teaching him from an early age to keep all four feet on the ground when meeting people.

The personality of German Pinscher is defined by highly intelligent dogs with strong prey drive. He is strong-willed with a strong work ethic and is a devoted family companion. He is a go-everywhere, do-everything kind of dog.

In the dog training area, the German Pinscher is a highly intelligent dog and they are good learners. They can be strong-willed and stubborn at sometimes. According to this breed’s parent club, these dogs can be manipulative and intent on getting their own way.

German Pinscher may become bored with the basic dog obedience training unless you are creative and make it interesting. After your dog has learned a lesson, move on to the next new thing. Use positive reinforcement training techniques and you will get positive responses.

Some of the facts of German Pinscher dogs are as follows:

German Pinscher dogs are generally healthy but like other breeds, they are prone to certain health issues. Some of the health problems are as follows:

Which dogs breed are they similar to?

Some of the breeds similar to German Pinscher dogs are as follows: