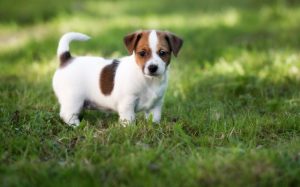 The rough-coated Jack Russell Terrier Puppies goes through a series of development phases before becoming a proper adult. As a responsible owner, you should observe every little change in your puppies. Here are the details of the stages that the Jack Russell Terrier puppies go through.

A mother Jack Russell Terrier gives birth to 4-8 puppies at a time. The newborn puppies have a rough or broken coat having their eyes and ears firmly closed. The teeth development have not started yet. However, the puppies are able to taste and touch.

They are likely to spend most of their time by just eating and sleeping. But this is a part of their development as various neurological changes will be going on.

The puppies will be mostly influenced by their mother or mother’s surrogate and litter-mates. Mostly, the Jack Russell Terrier puppies will just eat milk as they’ll need to have milk every 2 hours in an adequate amount. Their mother and siblings play an important role to keep their body warm.

In this stage, eyes of the Jack Russell Terrier Puppies open and they’ll be able to stand and walk. Furthermore, sense of hearing and smelling develops and the puppies will start wagging their tail. Teeth also begin to appear and the little puppies start to bark as well. They will be able to see clearly by the end of this stage.

During this stage, the puppies will only feed on milk; either mom’s milk or commercial.

The socialization stage is an important time frame for your Jack Russell Terrier puppies. They’ll need to be introduced with other dogs and people. The puppies will be aware of the surrounding and enjoy their playtime by the fifth week. Semi-solid and liquid food items are to be fed to the puppies.

Experiences and socialization with people and other dogs in 5 to 7 weeks will play an important role in how the puppies will continue interacting. However, they’ll even be influenced by people after a month. Therefore, you’ll have to make sure that the puppies remain with their mother and siblings for at least 8 weeks to learn inhibited biting and other socialization skills.

You’ll have to start house training your Jack Russell Terrier puppies from the 7th week. They’ll go through a normal fear during 8 to 12 weeks because they’ll be working on their social skills. The puppies will be paying attention to both people and their litter-mates. So, it is necessary to control your puppies with positive reinforcement and encouragement.

You can consider this period as the “elementary school age”. As the human children, the Jack Russell Terrier puppies at this time, are very much influenced by their playmates. Playmates can be both human and dogs. Apparently, the puppies will understand ranking and use it in terms of submission and dominance.

Teething and mouthing issues will increase a lot as the teeth development will be completed. So, it is necessary to teach your puppies some manners. They will be able to eat solid food items. The puppies will go through another fear stage when they reach 4 months old. Hence, it becomes necessary to supervise and monitor them.

In this stage, the Jack Russell Terrier will understand that they have a pack (combining both human and dogs). They’ll behave according to the influence of their pack members.

Challenging the owner is very normal as the puppies will be exploring dominance and role in their pack. Sexual behaviors are likely to be exhibited if you don’t spay or neuter your puppies.