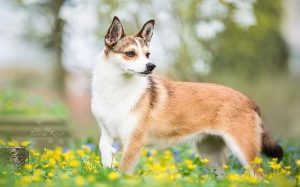 Norwegian Lundehunds rarest in the canine world. These s are full of life, lovely, and affectionate. They make an ideal family pet with their even temperament and protective personality.

Lundehund were developed in 1500 on the island of the northern and western coats of Norway. These breeds were bred to hunt puffin birds. In the 19th century hunting puffin birds became illegal when the birds were named as protected species. After that, the Norwegian Lundehund started declining in number.

Around the World War II, Norwegian Lundehund were almost extinct, therefore the breeders revived the breed. The American Kennel Club recognized the breed in 2011, and remains small in number.

Norwegian Lundehund are good with children as they are energetic, they make a good companion with kids. They are playful, lively and protective as well.

Norwegian Lundehund love carrying their toys around everywhere they go. They will enjoy their playtime with their playmates running from one place to another. Kids who can teach them new tricks can be their best playmate.

These breeds, however, should not be trusted around kids every time. They may bark at kids and chase them when it feels irritated. Supervise your child and teach them not to snatch its toys and pull its tail.

Norwegian Lundehunds area very friendly dog breed but are quite reserved with strangers. With its own family, they are very out-going and lively. They are very protective which make them an excellent guard dogs.

These dogs are quite independent thinkers may tend to manipulate you. The Lundehund is not only observant but is hyper observant. It will let you know by barking if anyone approaches the territory.

Norwegian Lundehunds primitive breeds. They share some behavior like wolf and fox meaning, if you see and toys beneath the sofa or bed then don’t be surprised. They tend to hide their things as if preparing for the winters.

These breed do best in homes with busy people around them to keep their mind stimulated. Norwegian Lundehund love to stay in pack with their loved ones. If left alone for longer periods, they may develop separation anxiety and become destructive and diggers.

If the leaders are not confident then the dog might take the position and rule the session. Norwegian Lundehunds are very tuned in every step you take. They should be sent to puppy school and obedience classes to help them socialize with other pets and people.

Lundehund Syndrome: This condition affects most of the Norwegian Lundehund. It is a collective term for a group of intestinal disorders.

This is a major disease any Norwegian Lundehund can have. Other are same as all breed such as, canine hip dysplasia, cataracts, epilepsy and cancer. These kind of disease are common among the canine as they age gradually.

If you want to purchase a Norwegian Lundehund puppy then it will cost you somewhere around $400 – $600. The price of the breed depends upon the quality of the breed as well as the breeders.

The Norwegian Lundehund gives birth to 4-8 puppies at a time.

Height: The Norwegian Lundehund stands up to 12-15 inches tall which relatively makes them the small sized dogs.

Weight: The average weight of the Norwegian Lundehund is 13-20 pounds.

To conclude, Norwegian Lundehund are best suited for homes who can give them enough time and training. However, temperament and personality depends on how you raise them.