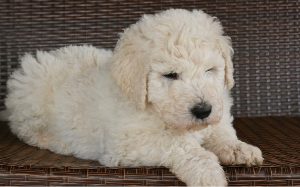 The development stages of the Komondor puppies are described below which might be a help for you to understand what behavior changes takes place in which stage.

Since the Komondor puppies eyes are open, they will have a clear vision in the third week and will get to know how their mother and littermates look like.

During the fourth week, Komondor puppies will stand up and take its first step and will start exploring the surrounding.

This is the period where the Komondor puppy learns it is a dog. It is important that it should be kept with its littermates and mother during the period. During the eighth week, the puppy will go to its forever home and should be trained with basic commands in this week. Teething starts and chewing habit will develop.

They should be treated with love and affection during this stage since they are highly influenced by the behavior you show them. They should be trained with positive reinforcement and treats for acceptable behavior to encourage and motivate them.

The period of rapid growth is complete and the Komondor puppy is approximately two-thirds of its adult size. Compared with the three other stages the juvenile period is one of the gradual change and will start understanding the commands as well as the behavior you show them.

It is a time when a Komondor puppy will test its wings and wander further away than before. They will start analyzing your behavior and may tend to dominate you. They should be taught to respect the owner and should be sent to puppy school and obedience classes for better behavior.

Your Komondor puppy is no more a puppy now. They are adult and will start developing sexual behavior. They should be spayed and neutered in time to avoid these behaviors. They will have all the teeth grown until one year and can eat all the dog food.

A well-socialized puppy who has been meeting people may start to show apprehension or fear toward people and things during this period. This stage is related to a cognitive recognition of fear which means they interpret it on an intellectual level.

The regular socialization of Komondor puppy should continue throughout the life of the dog. If you are planning to keep komondor puppy in your home then you must know about these developmental stages of puppies.

Visit Doglime to know more about different dogs puppies and their behavior.