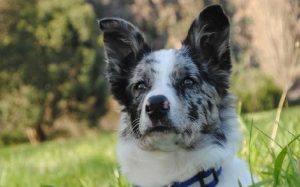 The Koolie is a medium-sized working dog. It is also known by the names: Australian Koolie, German Coolie, German Koolie, Coulie. It is a working and herding dog that is very active and needs a dog owner who can meet up with their activity level. It can adopt an apartment life as long as it is provided with regular and enough exercise.

The Koolie is a sturdy dog with a broad head and long muzzle. The eyes are beautiful and expressive while the ears are a triangle in shape and semi-erect. They have a bushy tail like that of the fox. Although a working dog, it also does best as a family pet.

The origin of the Koolie is in Australia. There is nothing much documented on this breed. It is bred to be a working and herding dog that was used in farms to look after cattle, sheep and also herd them. It is believed that Koolie was brought to Australia by German immigrants due to which it is also known as German Koolie.

Temperament: The temperament of the Koolie is easy going, alert, and energetic. They are a highly active dog who needs regular exercise like running, walking or just playing. They are good with strangers as well if properly introduced. If they sense something going wrong, they will bark and let the owner know.

Behavior: As a working dog, Koolie needs a good amount of exercise. If they do not get the required exercise, they can become anxious and even depressed. So involve them in household activities and also in regular exercise.

Personality: The personality of the Koolie is friendly, playful, and gentle. They love spending time with their people and enjoy being in their company. They are good with other pets too if raised together from an early age.

Is Koolie is Child-Friendly?

Koolie gets along well with children as they are playful and friendly with them. They are highly energetic which makes them play with kids all day long. Although they get along well, their interaction should always be supervised as kids might play rough sometime and hurt your dog. So, teach your kids to behave around dogs.

Koolie can be trained easily as they are intelligent and eager to please their owner. They tend to respond well to positive methods of training where treats are included as a reward. This will keep them motivated and focused on the training session. Establish a firm and consistent leadership and never be harsh with them.

Koolie is generally a healthy breed with few possible canine health problems. It has a life expectancy of 12-15 years.

The Koolie comes in the following colors:

Cost: The average cost of the Koolie is between

Height: The average height of the Koolie is between 13-23 inches.

Weight: The average weight of the Koolie is between 33-53 pounds.