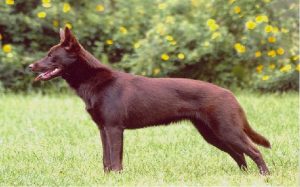 Australian Kelpie is a capable and muscular dog with full of life and energy. They are extremely devoted and protective to their families. One of the smartest of dog breed makes challenging to live with. Australian Kelpie are agile dogs which will thrive in human counterparts.

Kelpies are workaholic, they are best suited for homes where they can get enough time to exercise and offered a job to do. As we all know a tired dog is always a happy dog. Having the Australian Kelpie in the home means living a healthy life with proper amount of exercise sacrificing your busy schedule.

The Australian Kelpie exists since the late 19th century. During that period, the sheep and wool industries in Australia were becoming huge success and the ranchers needed dogs who could handle the unruly sheeps.

It is believed that the Australian Kelpie were crossed between the wild Dingoes to produce a strong, agile and muscular dogs. Kelpies were brought to North America about hundreds of years ago. The first Australian Kelpie ever purchased was a black-tan female litter by the man named Jack Gleeson during the early 1870’s.

Today, thousands of Australian Kelpies are employed for herding livestock every day in their home of Australia as well as in the United States, Canada, and other parts of the world.

The Australian Kelpies are independent streak which is beneficial while working in a field. They are very focused and highly intelligent breed which needs to be challenged both mentally and physically. Despite their independent nature, they should not be left alone for longer periods.

Talking about their personality, Australian Kelpies are lively, full of energy and loyal dog breeds. They are very sensitive dog which will not respond to harsh behavior or punishments. They are friendly and non-aggressive with everybody but are quite reserved with strangers. However, they will not attack them but may bark to make you alert.

Training the Australian Kelpie is easy as they were bred as a working dog, they will thrive during the training session and will happily obey your commands. These breeds are quick learners as they are very intelligent and smart.

Australian Kelpie needs to be trained with soft tone of voice followed by treats. Training should be consistent and should be made fun and interesting.

The Australian Kelpie is a healthy breed. Since they were bred to work in the Australian climate without supervision, these breed are very healthy. However, they may suffer from common health issues as they age such as, hip-dysplasia, elbow dysplasia and collie eye anomaly.

Yes, Australian Kelpie dogs are child-friendly because t dogs are energetic, playful and lively. They have great sense of humor which will make them a good pair with children. They are very friendly and gentle with kids.

Remember, you should always supervise you child while playing with a canine. With Australian Kelpie, they have a tendency to nip and herd the children.

The A Kelpie coat in different They are:

Australian Kelpie can give birth to 5 puppies.

It is required to brush the Australian kelpie’s coat once or twice a week to remove dead hair and keep shedding to a minimum. Some have a double coat that sheds heavily in the spring.

Nails should be checked time to time and should be trimmed weekly. Broken nails might cause irritation and infection as well.