Skip to content
Home » Doglime » Learn What Your Dog Thinks 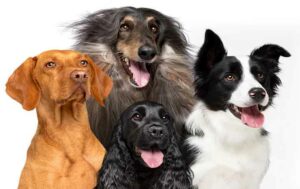 Imagine it is a bright Sunday afternoon. You are relaxing with your dog in a park talking to them. They, too, bark at your questions as if they understand everything you’re saying. But do they?

Have you ever wondered what your dog thinks when staring out the window? Did they plan to comfort you when you were feeling sad? What goes on in the dog’s mind in general?

Zoe Williams asks experts if dogs can understand human laughing and if they purposefully make you laugh. Dr. Brian Hare, the author of The Genius of Dogs, states, “Dogs certainly seem to respond favorably to good human emotions, such as laughter and smiling.”

However, It’s more difficult to say whether they understand the joke’s meaning. For example, do dogs have the ability to laugh, and do they make each other laugh? As you get to know a dog, you’ll notice that it has a distinct look of happiness or contentment.

Dogs with broad features, such as staffies and rottweilers, appear to be grinning, whereas a German shepherd’s lips curl back. Some breed owners say their dogs are happier because they are more cheerful than the average.

When dogs and owners stare at each other, both the dog’s and the owner’s oxytocin levels rise. According to recent theories of canine domestication, selection for friendliness led to the evolution of a new cognition in dogs.

A recent study on dogs’ behavior also revealed that the tone we speak to them matters more than what we’re saying. For example, saying meaningless phrases or scolding them but with a praising tone would make them think you’re praising them. However, Even phrases in a harsh tone could set them off.

However, according to philosopher Donna Haraway, tuning in to the desires of another species has a significant impact on our cognition.

According to expert Petrina Firth, 70 percent of dogs yawn when they witness someone yawning, which is a simple indication of empathy. She claims to have only met one dog with clinical separation anxiety – an over-attachment to one person – in her career.

What about a dog that can be left for 40 minutes but freaks out after 45? According to the current best theory, your aroma in the air fades minutely over time. At the moment, a young puppy will be distressed: “I’m on my own, and I don’t like it.” As it ages, the dog fears that it will experience that awful emotion – worry about worrying, which is anxiety.

In a study of free-roaming male dogs in Chile, neutering did not affect sexual activity. Instead, he believes agitated or overheated dogs pant or stares at something with a ‘whale eye.’

Some dogs are xenophobic, which means they dislike strangers and may feel compelled to defend themselves if they meet one. “By far, the most common problem I see is aggression,” Hare says.

If only we would listen, dogs could educate us about cause and effect. Instead, we’ve instilled these uncontrollable urges through generations, and now they’re here to tell us what to do with them.

In the absence of a bull, the cockapoo will have to do with a labrador; a show cocker is supposed to be out retrieving, not showing off.

But to answer the still unanswered question, Yes, Dogs do think. However, their thought processes are very different from that of humans. We can confirm this theory by acknowledging that your pets understand your commands and store them in their brain. Hence, they understand what you’re saying.

But, the dog’s frontal lobe, the part which helps in problem-solving, memory, language, judgment, and impulse control, only occupies 10%. The frontal lobe is the largest part of the human brain occupying a third of the human brain. This could help better understand that even though dogs think it would not be the same way as humans do.

If you want to know what they think about it precisely, there’s no way to know he correct answer. On the contrary, you could observe your pet’s behavior to decipher what they might be thinking. Then, with a better imagination, you could better imagine what your pet has in its mind.