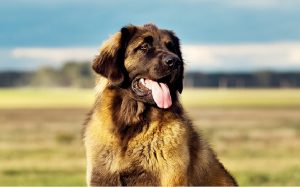 The Leonberger is a big-sized, lion-like dog which has a masculine feature with a head that is deep than broad, rectangular in shape. The muzzle length and the length of the back skull is approximately equal. Their chest is broad and deep. the forelegs are muscular, straight, well-boned and parallel to each other. They have a long feathery tail.

The Leonberger has a long, double, weather-resistance, moderately soft coat. They shed heavily twice a year and fairly the rest of the year. Groom them at least twice a week, to remove dead hair and to keep their coat soft and shed free.

The Leonberger is originated in Leonberg, Germany in the mid-nineteenth century. They were originally developed as a working dog and soon they become companions for people and was owned by famous celebrities and rich family.

Leonberger nearly become extinct during World War I with only 25 being left and only 5 were of breeding quality. Thanks to Stadelmann and Josenhans who started a club to protect Leonberger from extinction.

Leonberger is affectionate and adore children but due to their massive size, they should not be left alone with children as they might fall on them and injure them very badly. Otherwise, with proper supervision, Leonberger makes great playmates and a fluffy pillow or even beds for toddlers.

Temperament: The temperament of Leonberger is gentle and sensitive. They are loving and loyal towards their family who dislikes family arguments as they are sensitive and will try to intervene. They do not prefer kennel, they love to be with their family inside the house.

Behavior: Leonberger is known as a gentle dog but before he hits his maturity, he is a stubborn and sometimes a destructive adolescent. As a child, he is a chewer who starts chewing anything on his reach. His this kind of behavior can be trained as he steps on maturity.

Personality: Leonberger a big and gentle personality. They are quite friendly with other pets and can get along with them pretty well. But they should be socialized at an early age so they do not show reserved behavior around other dogs and strangers.

Training Leonberger can be a difficult task to do as they are big and stubborn. Start training at their young age so they do not get out of hand at their adulthood. He is likely to respond to a firm., gentle and consistent training. Reward with treats and vocal praises as to encourage and motivate them.

Leonberger is generally a healthy dog breed if provided with a good amount of exercise and a proper diet. However, they can face a few health conditions. They are likely to suffer from the following canine diseases:

The Leonberger comes in the following colors and marking:

Cost: The average cost of the Leonberger puppy is between $2200- $3500 USD. However, if you consider adoption, it will cost very low only with the expenses of taking care of the puppy before adoption.

Visit Doglime for more information about dog breeds and their information.