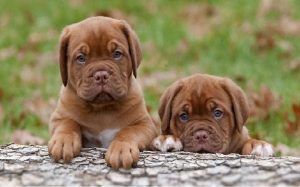 The Dogue de Bordeaux dog is a Molosser “” meaning mastiff in French. A massive body and stocky body are the trademarks of this breed.
Dogue de Bordeaux is a powerful and muscular French breed.

There are some theories about the origin of the Dogue de Bordeaux. It may be descended from the Bulldog, Tibetan Mastiff and from the Greek and Roman Molossus or from the Spanish dogs from Burgos. At the end of the middle ages, the Dogue was as a cattle driver and personal bodyguard. The Dogue de Bordeaux is now  established in France and gaining more popularity in other countries. The breed was recognized by AKC in 2008.

States imported the first Dogue de 1959 but it was not until 30 years later that DDB gained widespread recognition, thanks to his scene-stealing role in the Tom Hanks comedy “Turner and Hooch”. It is currently ranked 68th in popularity.

Yes, Dogue de Bordeaux dogs are child-friendly as they are more loyal to families and children However, children they don’t know may be more of a challenge. Children should always be supervised. They should be trained on how to interact with animals to avoid incidents.

Dogue de Bordeaux dogs can cause trouble when it comes to smaller pets including cats and other dogs. They may learn to interact with these animals if they are trained properly. This breed is most suitable for homes with no other pets.

Personality: Dogue de Bordeaux is serious and self-assured with an underlying sense of humor. They are a vigilant as well as a courageous companion. It comes with personalities like aloof, outgoing, comical, sweet, feisty, and quick to learn. He behaves according to the personality.

Temperament: The temperament of Dogue de Bordeaux Dog Breed is affected by the number of factors including heredity, training, and socialization when they are puppies. Puppies with good temperament are willing to approach people and be held by them. Enrolling them into a puppy kindergarten is a great start.

Behavior: The Dogue de Bordeaux doesn’t come no matter how nice can develop undesirable behaviors if he is bored, untrained or unsupervised.

Dogue de Bordeaux dogs are very smart and easy to train. Puppy classes are required for general socialization and training. They love training and learning and both make for a better companion and build a good relationship with the owner and family.

Dogue thrives on positive teaching methods. They excel in obedience, agility and herding, and even barn hunt and lure coursing and owners will discover something fun to do with their dogs. They may be stubborn but are trainable.

There are many circumstances where over-training your dog can be harmful and even undo all the hard work you and your puppy have put in. Positive reward-based training is important for your dogs.

Some of the facts related to Dogue de Bordeaux dogs are as follows:

Dogue de Bordeaux dogs are healthy dogs but like other dogs, they are prone to certain health problems. They are:

Some of the breeds similar to Dogue de Bordeaux dogs are as follows:

Visit Doglime to know more about different breeds of dogs.