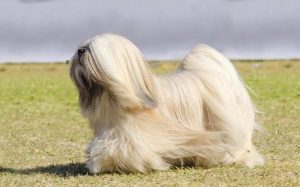 Lhasa Apso is longer than tall. The hair falls from the head over the eyes and they have mustache and beard. the forelegs are straight with all legs full of feathers. Their coat is long, dense and hard, heavy flowing all over the body.

The origin of Lhasa Apso is from the isolated mountain of Tibet. The name is taken from the sacred city of Lhasa. For thousands of years, this breed serves as a guard dog at the Buddhist monasteries in the isolated Himalayan. They have been associated with the Dalai Lama for centuries. The Dalai Lama helped establish the breed in America in the late 1940s.

The American Kennel Club recognized Lhasa Apso in 1936 under the non-sporting group. They currently rank 71 of 193 registered breed in AKC.

Lhasa Apso is not so child-friendly and are intolerant of children and are more likely to nip them. They are not best suited in the house with young children and toddlers. However, they are good with older children who to handle dogs and approach them.

Temperament: The temperament of Lhasa Apso is comical and smart. They are used as a watch and guard dog, so they make a great watchdog nowadays too. They are fearless and can face dogs bigger than them in size.

Personality: Lhasa Apso have a clownish personality that makes everyone laugh. They make a great family companion as they are funny and entertaining who likes to be the center of attention in the family. They are stubborn and a little with ego but they have a heart of gold.

Training Lhasa Apso is a quite challenging job to do. It requires a lot of patience and gentleness to train them. Harsh often treatment leads to biting and showing their aggressive behavior. So, one should be gentle and should establish a firm leadership with confidence and consistency. They should be rewarded with lots of treat and praises, so they remain motivated and focused on the training.

Lhasa Apso is not a breed likely to inherit any serious health problems. However, some of the few canine diseases that they are likely to suffer are:

The Lhasa Apso comes in various colors and markings, which are listed below: