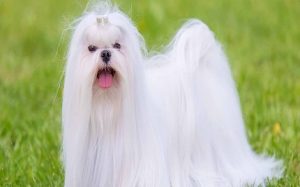 Maltese, which is also known as Bichon Maltese is a small dog which is a very friendly and gentle dog. This breed is known by many names all around the world. Some of them are the Maltese Spaniel, the Maltese Lion Dog, the Ancient Dogge of Malta, the Melita Dog, the Melitae Dog, the Roman Ladies’ Dog, the Shock Dog but they are famous as Maltese.

Maltese are covered with long and silky hair from head to foot. The skull part is slightly rounded with small and round eyes that are not set too far. The ears are droopy and are low set that is heavily feathered with long hair. The height is proportional to the legs and they have a tail which is dense with hair and plumped over the back.

Maltese is an ancient dog breed whose exact origin is not confirmed but it is believed that they are from Malta, a tiny island South of Sicily, Italy. They were possibly brought by Phoenicians and was spread around by them. Maltese was kept as a family companion and as a symbol of a fashion statement in its city, Malta. they were on the verge of extinction, but Chinese breeder kept on protecting them after that.

Maltese was first seen in the United State in the late 1800s. The American Kennel has recognized Maltese in 1888 as a member of the Toy group.

Maltese is a very friendly and gentle dog that gets along with children very well. But, Maltese is a small dog and children might play rough sometime or younger children might fall upon them which may injure him. So, they are best suited in the house with older children who know to approach dogs and how to treat them.

Temperament: The temperament of Maltese is gentle and playful. Although they are gentle, they are not fearful of larger dogs and stand in front of them challenging and often forgets that they are small. It is very loving with family and get well with strangers if socialized and introduced properly.

Behavior: Maltese has a sweet nature and are very welcoming of guests. However, they are wary of activity going around the surrounding which makes them a good watchdogs. It is best suited to live at home where there are home parents and old retiree who stays at home often. They might face separation anxiety if they are left alone for a longer period of time.

Personality: Maltese has a charming personality as a toy breed. They are intelligent, responsive and trusting of their family members. They love spending time with their family and can sit all day long by their side. However, They need exercise at least once a day even a walk of 15 minutes will do.

Maltese is a highly trainable dog breed. With some treats and praises, it can be trained easily. But, treat them gently as harsh and force hand can scare them and may not be able to catch the task. You should be very gentle with them and the training session should not be taken long. Include playtime in its training to keep his interested and focussed.

The Maltese is prone to the hereditary health condition and sometimes even some canine diseases which are listed below:

Size: The average height of a Maltese is between 7-9 inches. The average weight is 7 pounds and sometimes even under 7 pounds.