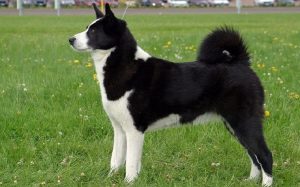 The Karelian Bear Dog was originated in northwestern Europe in the area called Karelia from where it got its name. It was bred for bear hunting purpose and used to hunt not only bear but other animals like wild boar, moose, elk, wolf and so on.

Karelian Bear Dog is a medium-sized dog which is well-muscled, strong that have great strength. Karelian Bear has a medium and thick double coat that is soft from under and slightly harsh with straight hair on the .

Karelian Bear is a hunting dog and is a great hunter while on the field but at home, it is a very sweet, loyal and devoted family companion. It is generally friendly towards unfamiliar people but mostly they are reserved and suspicious. It shows dominant behavior towards other dogs and is aggressive towards them. So, they need early socialization with a variety of people and dogs to avoid their aggression towards them.

Karelian Bear is an independent dog who like to do things on its own and do not prefer being told what to do and what not to. As a stubborn breed, they can be quite hard to train if you are not an experienced owner who knows ways with dogs. Karelian is not for time or a novice dog owner.

When to Train Karelian Bear Dog?

As the basic training is over, at the age of 18-24 months, start advanced training.

Where to Train Karelian Bear Dog?

Karelian Bear Dog should be trained at the house if you are giving his obedience and housebreaking training. Home or back yard is suitable if you are teaching him the basic task. Once the basic training is over, take him to the park or a big area for advanced training.

Agility training requires a big and open area, so they can learn without much difficulties. Remember to take him out for training on a leash, so that he does not run off chasing something he caught his sight on.

How to Define a Task for Karelian Bear Dog?

Defining a task means to separate a certain job with some physical sign or words. For Karelian Bear, defining a task is easy as long as you do it right. For starter, use simple words like sit, eat, stop, lay down and so on for a particular task. Use only one word for one task so that your dog does not get confused and mix things up.

With words, you can also gesture them so that they learn quickly. To ask them to sit, point your finger down and up to get them to stand up. Teach your dog gesturing language even if you sign him using only your body, he should be able to understand it.

While teaching him your body language, it is necessary for you to know his physical language. Dogs cannot talk so you need to understand his body language and act accordingly.

Training Karelian Bear dog is a difficult task to do as they are independent and can be stubborn sometimes. So to train them and make them understand you and follow you, following methods and tip should be taken into account:

Be gentle: Leader doesn’t mean that you force him and get on him. Do not be harsh and forceful on Karelian Bear as they might be scared and sometimes even aggressive if it becomes too much for it. Be gentle with them and be on ease on them so they can catch on task quickly.

Positive reinforcement: Positive methods of training is best for your Karelian Bear as it keeps them motivated and encouraged. Reward them with delicious treats, a lot of vocal praises and a gentle pat on their back after it completes a task.