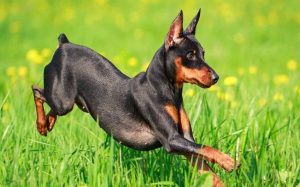 Miniature Pinscher looks like Doberman in a smaller version, but they both are a completely different breed. Miniature Pinscher, also called by names like Reh Pinscher, Zwergpinscher, Min Pin and Minpin, is known as “The King of Toys”.

They were created by crossing Italian greyhound and Dachshund. Min Pin was originated in the 18th century in Germany. They were first bred to hunt the rats and also to guard farm and hunt vermins.

Miniature Pinscher is an intelligent dog with a great attitude, confidence, and self-possession. The average Min Pin stands 11 inches at the withers, weighing between 8-10 lbs. Their life span is between 12-14 years. Min Pin has a short coat that comes in stag red, black colors with rust markings.

Min Pin is not called King of Toy just like that. They have a high-spirited, bold, confident, self-assured and gregarious temperament. Min Pin is a small dog with a big attitude.

Miniature Pin are a great watchdogs as they bark and warn his people the approach of any strangers. They chase away anything they see moving like cats, rats, squirrels and possibly dogs.

Min Pin is gentle and loving with people but they can be dominant and show aggression towards other animals. They can get well with cats after getting used to them but keeping birds with him in the same house is not a good idea.

Miniature Pinscher to bark a lot at every single thing that catches their sight. This barking habit of this dog can be very disturbing and annoying. So, training them to listen to you when commanded to stop is necessary.

Min Pin loves to be a center of attention. They will try to entertain you and play the class clown to attract your attention towards them. Min Pin has high energy and is always running around and chasing things. Close supervision is needed as they might hurt themselves in the process.

Min Pin is a protective, proud and stubborn dog. They bark at almost anything they see continuously till they leave his territory. This barking can be a very bad habit, hard to stop if they are not early trained.

Miniature Pinscher is very courageous and steps forward to fight anything despite their size. They are even willing to fight dogs much bigger than their size. They are protective of their territory and mark them by urinating everywhere possible. If an intruder breaks in, Min Pin will not hesitate to attack him and can bite anywhere he can reach.

Min Pin is hard to train. Although they are small, they like to be in charge and training them can be very challenging. They are hard to house train, so an obedience class is recommended. If they are properly trained by a consistent leader, they can be very obedient.

All dogs are prone to some health problem including Min Pin. It is important to be aware if you are considering this breed. Some of the few diseases that Min Pin might face are Legg-Perthes disease, Skin problem, Progressive retinal atrophy, and some minor health problems.

Are This Dog Breed Child Friendly?

Min Pin can do well with kids as long as kids are being supervised by elders. They are small and can get injured by them. Also, they do not like rough playing and when the child doesn’t know how to handle, he might get angry and sometimes bite.

What Can Make Your Pinscher Aggressive?

Min Pin is not usually an aggressive dog. Rough handling and crossing their territory can make them aggressive.

Min Pin is a great . They become very protective of their people and their territory which is why they do not get very well around strangers. They do not trust any stranger guest that comes your house. So, introduction should be done to avoid attacking from your Miniature Pinscher.