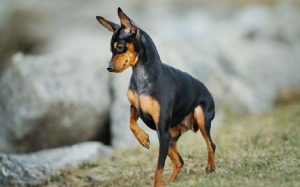 Miniature Pinscher, also known as Min Pin is a small, tiny dog whose appearance is similar to Doberman Pinscher but in a smaller version. They are also known as King of Toys due to its self-assured attitude. Min Pin is a very active, energetic, fearless, and alert dog who enjoys the company of his family.

They are naturally well-groomed breed with short coat that does not required much caring. They has royal bearing and a prancing gait. You cannot help but notice Min Pin while they walk down the street.

Miniature Pinscher is a breed of dog that is originated from Germany. They were for hunting rats and look after farms. Min Pins were supposed to be bred from crossing a small short-haired terrier (German Pinscher) with the Dachshund and Italian Greyhound.

The AKC (American Kennel Club) recognized the breed in 1929. At that time Min Pins were shown in the Terrier group. In 1930, they were reclassified as Toys and called Pinscher and renamed to Miniature Pinscher in 1972.

Min Pin can get well around children if brought up with them. They are overwhelmed by loud noises and quick movements of children. So, Parents supervision is needed while letting them play with each other.

Miniature Pinscher is a very alert, active and protective dog. They do not fear anything, even something 10 times bigger than their size. So, Min Pin sometime should be protected from their own misguide of instincts.

They are a fun and entertaining dog which can sometimes become curious and dig yards and chase moving objects. Therefore, a fenced yard will keep them from running off and safe.

Min Pin is an extreme barker and bark at almost anything they see from strangers to a squirrel running in your yard. So, they should be trained an early age properly as not to get this habit of frequent barking out of control.

Min Pin is a stubborn breed so training them can be a tough task to do. They are smart and quick at learning things. For training, they need a consistent leader, so they can be very obedient animals.

Min Pin should be kept interested in short and fun training. To make your Min Pin well-behaved dog, you need to start training him at an early age which is between 8-10 weeks.

Min Pin tends to bark a lot at any things they see. They need firm training to control their inappropriate barking which can be started from an early age.

Min Pin has an average life span of 12-14 years. It is not that they can suffer from any kind of diseases in their life but they may be prone to some minor problems like Legg-Perthes, Hypothyroidism, Patellar luxation, Progressive Retinal Atrophy, and Heart Defects.

To prevent all these health problems, they should be regularly exercised by taking them to walks. Time to time visits to a local veterinarian is a must.

Min Pin comes in six colors and they are –


While buying a Min Pin puppy, do not buy from an irresponsible breeder or pet shop. Go for a reputable breeder who tests their breeding dogs to be sure they are free from any genetic diseases that their parents might pass to their puppies.