Missing Dog Located By Drone: Rescued After 10 Days in Woods 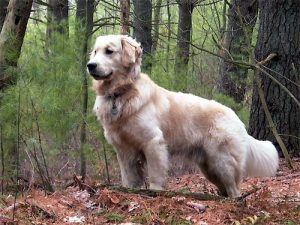 Lost and Found! This dog is finally reunited with its family after 10 days. All thanks to the drone.

Gary and Debbie Morgan asked for help putting up flyers and notes this month to locate their missing dog Meadow, a 16-months-old golden retriever.

The golden retriever was last seen in Andes, New York, in a wooded area. Furthermore, Meadow, the dog was missing for about a week, when a stranger, Brian James encountered Morgan’s plea about their lost dog.

The flyer described Meadow as “small, stocky build and a pink collar”. In addition, it also offered $500 reward.

Later, James told ABC News, that he thought he can offer some help with some new searching ideas, since he’s a hiking guide and a drone pilot himself.

I am realizing that it might be easy to see her from the air if we find her before snow falls” he said in a video recorded of his search. He added, “Alright, I was able to get a visual on Meadow from the air”, after he located a patch of white in a forested area.

According to the news outlet, James quickly moved to the spot where he saw Meadow via the aerial viewpoint of the drone and rescued the golden retriever. Fortunately, the dog wasn’t hurt.

Finally the Morgan’s were reunited with their furry baby after 10 days. “At the last second, he saw a small white dot on the forest floor, It was Meadow” Gary said in the World News Tonight.

Whereas, Debbie added, that they are “so grateful for Brian for showing up when he did and being able to rescue her”. Moreover, James gave a statement saying “everybody’s got the capability to help. You never know what will come of it” elaborating why he chose to help the Morgans.

At last, “It was kind of like losing your child” Gary added and told WHIO that Meadow is their “forever dog”.

Its obviously an amazing and overwhelming moment when you finally get to see and hug your lost dog. Nothing brings joy than your furry friend who’s as overjoyed as you to finally get a chance to be reunited.

It was same for the Morgans and Meadow. As Gary explain, “I was all over her but she acted like no big deal. But then when we got ready to leave that spot, usually Meadow doesn’t get in the car and normally you have to pick her in the car”. However, there was a surprise for Gray, he added, “Not this time, she jumped up in the car and laid down. She kind of looked at me like, ‘let’s go”’.