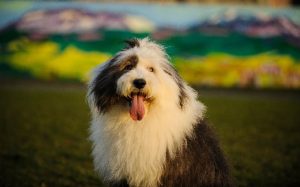 Old English Sheepdog often known as Sheepie, are good-natured, enthusiastic and sociable dogs. They do best with family, who can give them at least one hour of the day to romp and exercise.

Old English Sheepdog dates back to the late 1700s or the early 1800s. The “Bobtail” was developed in the west of England, in the counties of Devon and Somerset and the Duchy of Cornwall.

By blood, the breed are not fully English, in fact, they have Scottish, European and Russian ancestry. And technically, they aren’t even sheepdogs, OES were employed to drove cattle over the market in the county roads. Shepherds would often shear down the Sheepdog’s blue-grey coat once a year and use the clippings to yarn for clothing.

With their powerful gait and personality, the Sheepdogs showed well in the show rings. The Stockmen represented their OES in England since 1865. However, the American Kennel Club registered its first OES in 1888 and in the year 1994, the breed made their first appearance in the winner’s circle at Westminster Kennel Club.

Old English Sheepdogs very gentle and protective of children. They are great protectors and tend to herd children to some safe place. They’re even great nanny for toddlers teaching and supporting them while walking.

Don’t be surprised if your OES runs after your children’s school’s bus. They just want to confirm if their playmates have reached to school safely or not. No matter how friendly your pets are, always supervise them around children. They might unintentionally hurt them while playing.

Old English Sheepdogs are devoted and clown pets who love people. Thanks to the breeders, they are one great protector of the house. When it comes to protecting, they take all by themselves. OES are loyal, calm and non-aggressive. They may be quite reserved with strangers but will not attack instead they will bark and let you know about the intruder.

Sheepie considers them as part of the family and needs to participate in each and every activity. If left for a long period of time, they will become anxious. Old English Sheepdogs are smart and independent thinkers. They might be strongly willed of their own, therefore, they should be guided from an early age to be in the right path.

Training an Old English Sheepdogs can be quite challenging. Since they were left to make their own decision while herding, the modern breed still maintains independence. You teach them how to do something and when mastered it, they will think another better way to do it on their own.

Firm leadership is a must while training OES. The Sheepdog responds well to motivating and consistent training. If you give your OES little bit of leeway, they will take it as a chance to and will start making their own rules.

Hypothyroidism: Old English Sheepdogs are prone to suffer from hypothyroidism which is caused by the deficiencies produced by the thyroid gland.

Deafness: Deafness, however, is considered fairly common among the old dogs. Some forms of deafness and hearing loss can be treated with medication or surgery but usually, it cannot be cured.

Hip Dysplasia: Hip dysplasia is a heritable condition where the thigh bone does not fit into the hip bone. Some dogs show lameness in one or both legs causing discomfort to walk.

The Old English Sheepdog gives birth to 5-8 puppies at a time.

Height: The male Old English Sheepdog stands up to 22-24 inches whereas, the female OES would stand up to 20-22 inches which probably makes them the large sized dog breed.

Weight: The OES should weigh up to 60-65 pounds to keep them healthy and free from any kind of diseases caused by overweight.

The Old English Sheepdogs are found in five different colors.

Breeds That Are Similar To OES

Therefore, Old English Sheepdogs are wonderful breeds with their loyal and loving personality. They need enough daily exercise to maintain their physique and stay mentally stable.