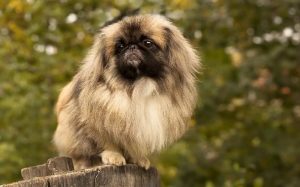 Pekingese are cute little toy dog with long and low bodies. They have an ego that is bigger than it is. Thanks to the imperial courts of China as they were favored one of the important and wonderful companions by the Chinese court.

These breeds are beautiful from their long and straight coats to the “V” shaped nose wrinkled between the muzzle and the eyes. Pekingese are perfect family dogs and great watch dogs leaving their size behind.

But where do they hail from? What kind of personality do they have? Here are the answers to your question to help you keep your pet happy.

The Pekingese dog hails from China dating back to the T’ang Dynasty of the 8th century. These small beautiful dogs were sacred by the Chinese and could only be owned by the members of imperial families.

Pekingese were revered beyond the reason and kept their bloodlines pure. They were carved with ivory, bronze and studded with precious gems and the theft of the Pekingese was sentenced to death.

The Pekingese reached at their height of popularity between 1821 and 1851 during the Tao Kuang Period. The breed was introduced to the outer world in 1860 after the British invaded the Imperial Palace in Beijing.

Most Pekingese were able to run away with their masters and others which were left were killed by their owners before the invading soldiers arrived.

According to the the legends, when the British Troops entered the imperial palace after invading Peking, three British Soldiers, Captain John Hart Dunne, Lord John Hay and Sir George Fitzroy discovered five Pekingese guarding their mistress who had committed suicide. The dogs became the reward of the war and were taken to England where two were gifted to the Duchess of Wellington, two to the Duke and Duchess of Richmond and Gordon and one to the Queen Victoria who named it “Looty”.

Pekingese were considered as a rare breed although by the 1890’s, they were smuggled out of China. The breed was known by various names like, The Chinese Pug and Pekingese Spaniel. The popularity of the breed started spreading over the world including the United States. The American Kennel Club registered the first Pekingese named “Rascal” in 1906.

Pekingese are not good for homes with toddlers. These dogs are aware that they are the dog of royal ancestry and are full of dignity and aloofness. Pekingese won’t tolerate the kids who will treat them roughly. They are very possessive towards their toys and food and children who will try to snatch them, they might bark or become aggressive towards kids.

They can be best with older children who can teach them tricks, play with them and treat them like a “king” of the house. Pekingese need a high amount of attention as well as affection. If not treated properly they won’t back out to defend themselves.

One great way to define a Pekingese is “Stubborn”. If you cannot go right with your toy pet, then they will be hard to keep in a home where there is no firm leadership. Pekingese are tiny, beautiful and delicate breed but are regal by nature. They are independent dogs with mind of their own.

Pekingese are generally well behaved breed but are prone to barking. They will bark anything they see, cars, animals even people. Their barking will become a problem when they’re left alone. Peki tend to easily develop separation anxiety which will lead to stubbornness and aggression.

The Pekingese love their family and staying in the pack. They might get independent at times but will romp around when they’re in their happy mood. Pekingese are best suited for home with retirees and family with stay at home.

Pekingese are very difficult to train. They think that they are the leaders of the home and some owners however treat them the same way. This makes even hard to train them.

Training should be started at an early age. It should be consistent and should be done with patience and strong leadership. They should be motivated timely followed with treats.

Brachycephalic Syndrome: Brachycephalic syndrome is a condition which causes difficulty in breathing. This condition occurs in those breeds which are bred to have a small face. Pekingese are prone to this disease from the day they are born since they have small face.

Cataracts: A cataract is a eye disorder which causes opacity on the lens causing cloudy appearance in the dog’s eye.

The price of the Pekingese puppy varies from breeder to breeder as well as the quality of the breed. If you buy a Pekingese puppy from a normal breeder, then it might cost you somewhere around $300 – $600. But if you buy a pure breed of Pekingese then it may cost you from $2,000 – $3,000.

Height: The Pekingese is toy breed standing up to 6-9 inches.

Weight: The average weight of these breeds are 10-14 pounds.

Pekingese are found in six colors.

Which Breed Are Pekingese Similar To?

Hence, Pekingese are one of the most wonderful lap dogs. They are aware that they were the part of the royal ancestry and tend to have their own dignity and pride. Treat them gently and you will have the best addition in the family.