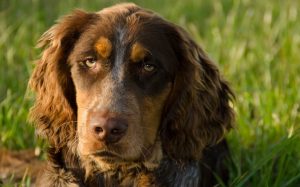 Picardy Spaniel, which is also known as Épagneul Picard was originated in French. It is known as one of the oldest continental spaniel breeds that were very popular among the French nobility. They were bred as a gun dog that was used for hunting, pointing, and retrieving. It has a powerful built, muscular body with a broad chest and long hanging ears.

Picardy Spaniel adapts an apartment life very well as long as they get the amount of physical exercise they need. So, if you are searching for a gentle, loving, and active dog breed that is also suitable in your apartment, Picardy Spaniel is an ideal choice for you.

Temperament of the Picardy Spaniel

The temperament of the Picardy Spaniel is gentle, intelligent, loyal, and devoted. They are a very affectionate dog breed that thrives on the love and company of is people.

Picardy Spaniel enjoys the company of its people and usually wants to be on their side. If they are neglected or not giving the attention they need, they tend to get depressed and even separation anxiety. Therefore, they are best for someone who can dedicate most of their time to the dog. Thus, they are best suited for a family that enjoys its canine company and is active.

Personality of the Picardy Spaniel

While training Picardy Spaniel, you need to be gentle with them. Establish consistent leadership upon them from an early age. They tend to respond well to a positive method of training so reward them with delicious treats and lots of vocal praises. Never be harsh on them as they are sensitive and might get scared.

Picardy Spaniel gets along with children very well as they are gentle and loving of them. They are playful with them so make great playmates for children.

Although they both get along well with each other, it is necessary to supervise their interaction as small kids might play rough and hurt them. Teach your children to be gentle with dogs and handle them nicely.

Picardy Spaniel is not at all an aggressive dog breed. They are in fact a very gentle and calm dog breed that gets along with everyone.

How Does Picardy Spaniel Behave Around Strangers?

Picardy Spaniel is wary of strangers and will bark at them if they see on in their territory. Although they are not likely to get aggressive and bite them. They will keep their distance and bark at them warning their owner about someone’s presence. Early socialization with a variety of human being is very important so they are not shy around them.