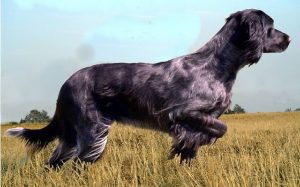 It is very much similar to the Picardy Spaniel from which it was descended but with different coat colors. Despite being a hunting dog, it makes an excellent family companion that is gentle and loving with its people.

Blue Picardy Spaniel is a strong and muscular dog that is covered with either a flat or wavy coat. They have feathery legs, ears, underbelly, and tail. They are great with kids, so they make an excellent family companion for all aged people.

The Blue Picardy Spaniel was originated in France as a hunting dog that used to hunt wildfowl. It is a new breed that was recognized as a separate breed around the 1900s in the mouth of the River Somme.

Although it has a very similar appearance to the Picardy Spaniel, it is recognized as a distinct breed due to its very different coat.

Temperament: The temperament of the Blue Picardy Spaniel is even-tempered, calm, loyal, and faithful. They are a very calm and gentle breed which makes them an ideal family companion despite their hunting history.

Behavior: Blue Picardy Spaniel needs a lot of love and attention from its family. They enjoy being with their people, helping them, so they do best for the owner that is active outdoor. If they do not get the attention and activities they require, they tend to become destructive.

Personality: The Blue Picardy Spaniel has a friendly, gentle, and loving personality. They are also an alert dog which makes them a good watchdog. They are loving and gentle with the family that will spend their time playing with them.

Blue Picardy Spaniel is not a hard dog to train as they are intelligent and are quick at catching new instructions and commands. Use a positive method of training as they tend to respond well to delicious treats and lots of vocal praise. Start from the basic obedience training and slowly enroll them to advance training.

Blue Picardy Spaniel gets along with children very well. They are friendly and gentle with kids and are loving towards them. They love to spend time with children and play with them. Therefore, they make good playmates for children. Although supervision is necessary when letting them both interact with each other.

Height: The average height of the Blue Picardy Spaniel is between 22-24 inches.

Weight: The average weight of the Blue Picardy Spaniel is between 43-45 pounds.