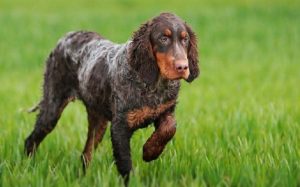 It has a strong built with a muscular body. they have a long muzzle, oval-shaped head, hanging, feathery ears, and broad chest. They make an ideal family pet for members of all as long as they are active outdoor.

The origin of the Picardy Spaniel was in France. The French nobility admired Picardy Spaniel and used to take them for hunting. Although it was developed as a gundog, they were also popular as a hunting dog and were popular hunters. They became more popular in the aftermath of the revolution when hunting was no longer restrained to the French royalty.

During the 19th century, the Picardy Spaniel was crossed with many hunting dogs. It changed the appearance and purpose of this bred and lead to the development of the Blu Picardy Spaniel. The United Kennel Club has recognized this breed under the category of gundog.

Temperament: The temperament of the Picardy Spaniel is docile, gentle, active, and very affectionate. Although they are a hunting dog, they make an ideal family pet due to their loving nature towards its people and gentle behavior towards the children.

Behavior: Picardy Spaniel thrives on the love and attention of its people. They love their company and want to spend time with them that is either laying with them or just laying by their side. So, they tend to form a good bond with the family and if they are left alone, they might get separation anxiety.

Personality: The personality of the Picardy Spaniel is friendly, active, and alert. As a hunting dog, it is naturally an alert dog that also makes an excellent watchdog for a family. They are alert if the activities going in the surroundings and will sound an alarm to warn their owner. They are an adaptable dog that does well in an apartment but their exercise needs must be met.

Training Picardy Spaniel is not a difficult job to do as long as you establish leadership upon them from a small age. They need firm leadership and a leader who can train them with consistency. They tend to respond well to a positive method of training, so reward them with delicious treats and lots of vocal praises.

The Picardy Spaniel is a child-friendly dog as they are loving and gentle with children. They make excellent playmates for kids due to their playful and mild nature. The kids might play rough sometimes by pulling, biting, and pinching. So close supervision is always needed to avoid their harsh behavior and to avoid any injuries to your dog.

Picardy Spaniel is a healthy breed in general but it can face some of the canine and genetic health problems.

Picardy Spaniel comes in the combination of the following colors:

Height: The average height of the Picardy Spaniel is between 22-24 inches.

Weight: The average weight of the Picardy Spaniel is between 44-45 pounds.