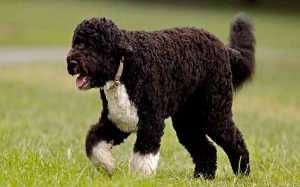 The Portuguese Water dog is a medium to a large-sized dog that is best known for its water skills. One of the distinct features of this breed is the curly coat that covers all of its body. Bred in Portugal, it was used as a fish herding dog that used to herd fish into the net for fishermen.

The Portuguese Water dog is an active and enthusiastic dog that can be a great family companion for a big family as well as for a single living person. They do not do well in an apartment as their required activity level is high. So, they should be kept in a house with a yard, where they can perform their regular exercise themselves.

The Portuguese Water Dog has Affectionate, Adventurous, and Athletic temperament. They love to be around its people and are very affectionate towards them. They have a loving and gentle nature that makes it great as a pet in a family. The Portuguese Water dog has the capacity to get along with anyone from old to small children due to their loving and friendly temperament.

The Portuguese Water dog is an independent dog that likes to be on their own sometime. Although they are independent, they do not prefer staying out in a kennel and wants to stay indoors with their family. They thrive for people’s attention and enjoy their company.

Personality of the Portuguese Water Dog

The Portuguese Water dog has an intelligent, smart and sometimes comical personality. As a fish herding dog, they have worked in water with fishermen and know lots of tricks and skill. Therefore, they are considered a smart dog who needs agility training for mental stimulation.

Many Portuguese Water dog owners have reported its comical act and behavior. They are said to be funny and do some silly acts just to make its people laugh. It is also said that, if they succeed in making people laugh, they will repeat that act again.

The Portuguese Water dogs are fairly easy to train as they are independent and can be stubborn sometimes. It needs to be trained from an early age when it sees you as its leader. Train them with consistency and firmness by using positive methods of training. Never be harsh or force on them even if they make some mistakes.

The Portuguese Water dog gets well with children if raised together. They are loving and playful with them. Although they are friendly and playful with children, their energy can be overwhelming for small kids. Therefore, their playtime and interaction should always be supervised closely. They get along with older children well.

What Can Make the Portuguese Water Dog Aggressive?

Portuguese Water dog is not at all an aggressive dog. They are gentle and loving towards the human being and also with other canines. Although they can get aggressive if someone continuously provokes them but it is not likely they will snap or bite immediately.

How Do the Portuguese Water Dog Behave Around Strangers?

Portuguese Water dogs are shy and reserved around strangers. They are quite introverted dogs that cannot get along with strangers well at first. However, if they are properly socialized from an early age with a variety of people, they will not have a problem getting along with strangers in their adulthood. After proper socialization, they can be friends with guests and visitors at the house.

Celebrity Who Owns This Dog

Ex-president of the United States of America, Barack Obama has owed two Portuguese Water Dog named Bo and Sunny. It was bought especially for his daughter, Malia who needed a hypoallergenic breed.