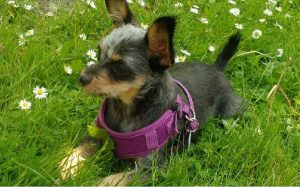 The Yorkie Pin is a small-sized designer dog breed which is also known as Yorkie Min Pin. It is bred by mixing two standard breeds, Yorkshire Terrier and a Miniature Pinscher. Since the Yorkie Pin came from two breeds that were created for hunting rats, the blood of hunters run in its vain.

The Yorkie Pin has the appearance very different from its parents as both parents have a vastly different appearance. Their appearance depends on how much genes they take from either one of the parents. It has a small appearance with a compact body like both of its parents. It can have a long, silky hair like the Yorkshire Terrier or short and smooth like Miniature Pinscher.

The origin of the Yorkie Pin is not known for sure but it is believed to be in existence since the 1980s when there was a trend of mixing various breeds. We can look at the history of its parents though, who contributed to the creation of the Yorkie Pin.

The Yorkshire Terrier was developed as a hunting dog that used to hunt rats and vermin in the clothing mills. It was very popular among the working class of people. It is originated in the mid-1800s and the American Kennel Club recognized it in 1885.

The Miniature Pinscher exact origin is still unknown. It is developed by crossing Dachshund and Italian Greyhound. It is used as a rat hunter that used to control rats. They were confused with Doberman Pinscher as they both make a similar look but in a mini version.

The Yorkie Pin is a child-friendly dog but they might not be best suited with small kids and toddlers. They do well with older children who know how to handle them and behave around them. However, if closely supervised, Yorkie Pin does well with small kids as well and can make a great playmate for them.

Temperament: The temperament of the Yorkie Pin is loving, fun, and friendly. They do well as a pet in the house and are affectionate towards its family. They are suspicious of strangers and do not trust them easily. However, if they are introduced properly, they are welcoming of visitors.

Behavior: The Yorkie Pin possesses both of its hunting parents genes. Therefore, they can have a strong instinct to chase and kill animals. So, if there are small pets in the house like a hamster and mice they should not be kept together.

Personality: The Yorkie Pin has a protective personality. They are very protective of their people and are not afraid to defend them if they sense some threats. Therefore, they can be taken as an excellent guard dog.

Training Yorkie Pin is not so difficult task to do as they are eager to please their owner. Establish a firm leadership upon them and train them with consistency and patience. Use positive methods of training by rewarding them with treats and a lot of vocal praises. This will motivate them and encourage them to learn new things.

The average life span of the Yorkie Pin is 12-15 years. They are generally a healthy breed but can inherit some genetic health condition from its parent’s breed.

The Yorkie Pin comes in the combination of the following colors:

Height and Size: The average height of the Yorkie Pin is between 7-13 inches and the average weight is between 6-10 lbs.