Skip to content
Home » Facts » A Rare Green Puppy of Golden Retriever From Scotland. His Name Is ‘Forest’

A Rare Green Puppy of Golden Retriever From Scotland. His Name Is ‘Forest’ 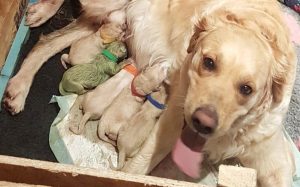 Isn’t it great and surprising giving birth to a green puppy?

Well, it is! How would they look like if they stay green forever? Tons of question are there regarding this rare green Golden Retriever puppy.

According to The Sun U.K. a Golden Retriever gave birth to nine pups and one of them was a rare green puppy.

A three year old Golden Retreiver Rio gave birth to a green puppy and was named as Forest by its owner, Louise Sutherland.

Louise Sutherland told The Sun, “The one puppy was stuck so me and my daughter managed to pull him out safely”. She added, “It was all hands on deck but when the puppies started coming, we saw a puppy with a green fur. We couldn’t believe it”.

Why was the Puppy Green?

Sutherland was in shock. However, according to veterinarians, the cause of green color is the green bile pigment found in the placenta in the mother’s womb. Louise Sutherland was told that “The color the color will be gone soon”.

Luckily, the pigment won’t cause any harm and the color won’t lasts forever. It will start fading out within the weeks.