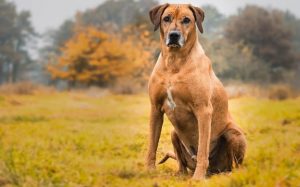 Rhodesian Ridgeback is a medium-sized dog breed that was originated in Africa. It is also known as the African Lion Hound, Shumba Imbwa, Van Rooyen’s Lion Dog and Simba Inja. The one distinctive trait of this breed is its ridge that runs behind its back from the spine. So, it got its name Ridgeback from it.

Rhodesian Ridgeback is a hunting dog that was used for hunting big game. They are a very muscular and well-muscled dog that can defend any big animals fearlessly. It is an active, smart dog which can sometimes be stubborn and becomes difficult to handle. They need a house with some space for them to perform their regular activities.

Temperament of the Rhodesian Ridgeback

The Rhodesian Ridgeback is a well-tempered dog. It is a friendly, calm, and smart dog that does great as a family pet and their companion. A matured Rhodesian Ridgeback is a well-mannered dog that is very gentle and loving with all the family members. Puppies are fun loving, curious, and playful. So, they are great to spend time with while you need some refreshment after a hectic day.

Rhodesian Ridgeback is a very energetic dog that needs an active family who can match up with its energy. They need a good amount of exercise so should be taken out for a walk, run or for jogging regularly. Other time, they can just be left on the back of the yard to play on their own. If they do not get the required activity they thrive for, they can become aggressive or anxious.

Personality of the Rhodesian Ridgeback

The Rhodesian Ridgeback has a quiet but protective personality. They are hunting and guarding dog, so their guarding instinct comes naturally. They are not a barking dog and will not disturb you or your neighbor from a continuous bark. If they see any unusual activity, they bark to warn their owner about it. Otherwise, they are mostly a quiet dog. They are an independent thinker and like to do things on their own.

Training Rhodesian Ridgeback is moderately easy as they can be stubborn sometimes and like to do things on their own. At an early age, you should establish a firm and consistent leadership on them. Once they mater obedience training, they can be enrolled in agility.

Use a positive method of training by rewarding them with treats and lots of vocal praises. This will encourage and motivate them to earn new things.

Rhodesian Ridgeback is good with children at home and is loving and protective of them. They may not get along well with unfamiliar children, so while taking them out for a walk, always keep it on a leash. Always teach kids to approach dogs and behave around them. It is necessary to supervise your children’s interaction with dogs to avoid any kind of misbehavior from either party.

Rhodesian Ridgeback doe not count in the list of the aggressive dogs. They are gentle with the human being and are very loving of their family. However, they are aggressive towards same-sex dogs and strangers with unusual activities. Other than that they are a gentle dog that can only show aggression when someone provokes them like any other canines.

How Does Rhodesian Ridgeback behave Around Strangers?

Being a guard dog, Rhodesian Ridgeback is naturally suspicious of strangers. They do not trust any unfamiliar person approaching their area. Therefore, it is necessary to socialize them from a very early age o that they do not show any aggressive behavior with your guest or visitors. If introduced properly, they are welcoming of guests.