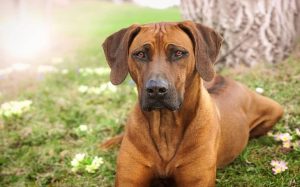 Rhodesian Ridgeback is a product of Africa that was bred to be an hunting dog. It is a , intelligent, and quite a stubborn dog. They are not for a novice owner, as they will not be able to handle its dominant and stubborn nature. It is best suited for an experienced dog owner who is very active and energetic.

Rhodesian Ridgeback is a large-sized dog that appearance is strong, muscular, and alert. The head is of fair length with expressive alert eyes and the ears are high set, medium in size. Their coat is short and easy to take care of. Rhodesian Ridgeback is an extremely clean dog with only little dog odor and minimal shedding.

The origin of Rhodesian Ridgeback is in southern Africa which history dates back to the 16th century. It was created by the local farmers to protect their livestock from predators and guard the family and their property. They were created with the cross of native ridged Khoikhoi dog and European dogs like Great Danes, Mastiffs, Greyhounds, and Bloodhounds. They are a powerful dog breed that could defend themselves from animals like leopards, baboons.

The Rhodesian Ridgeback today is a gentle and loving family pet. It was recognized by American Kennel Club in 1955 as a member of a Hound Group.

Therefore, both parties should be taught to behave around each other and their interaction should be supervised. While taking them out to play, take them on a leash as they are not so friendly with unfamiliar children.

Temperament: Rhodesian Ridgeback is an even-tempered dog that is affectionate, loving of their family member. As a hunting dog, they might not do well with other canine pet. However if properly socialized and raised together from an early age, they will get along with them.

Behavior: Rhodesian Ridgeback needs constant attention from its owner. They will show their destructive behavior if they are no attention is shown towards them or left them alone for a long period of time. It is not much of a barker, but if they sense some strange activity going on around, they tend to bark loudly and warn their owner.

Personality: The personality of Rhodesian Ridgeback is quiet, fun-loving, and loyal. It is very much devoted towards its family and especially to one particular member of the family. They form a strong bond and are very loving and protective of them. They are an alert dog that responds quickly to any odd activities.

Rhodesian Ridgeback is a challenging dog to train as they are independent and sometimes stubborn. It can’t be handled by a novice owner. They need a consistent and confident leader who can establish a firm leadership upon them.

They should not be treated harshly and training should be done using positive methods. Therefore, reward them with treats and vocal praises as they are quick to respond to these methods.

Cataracts: Cataracts refers to the cloudiness that is seen in the eyes of the dog. It is usually due to hereditary but not always. It may be caused due to diabetes, poor nutrition, and other accidents like electric shocks. Cataracts affect eyes vision and sometimes if it gets bad, can even cause blindness. Therefore, before it gets worse, take your dog to a veterinarian.

Deafness: Deafness in dogs can cause partial or complete loss of hearing. It is not a serious problem that affects the healthy life of a dog. However, if the deafness is caused due to infection or injuries in the ears, then consult the vet immediately.

Rhodesian Ridgeback comes in various colors and markings which are as follows:

Cost: The average cost of the Rhodesian Ridgeback puppy is between $800-$1000 USD. Its price can be increased as high as $2500 USD based on the quality of the breeders.