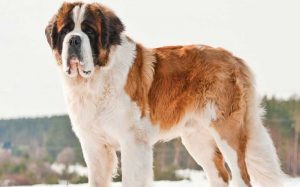 Saint Bernard is a giant, strong and energetic and muscular dog breed which has proved itself for being a fabulous pet all over the world.

This dog breed was originally bred to guard its homeland Switzerland. so they make excellent watchdogs as well as guard dogs. Proper training and socialization from the beginning can make them wonderful companion as well.

The Saint Bernard dog breed is well known for a family companion, mostly valued for their calm and patient temperament. Though its first appearance is similar to huge teddy bears, they are not easy to train and raise.

Saint Bernard is very affectionate and desires to spend most of their time with their family. It won’t be a good idea to leave them alone for a long time, it can result to suffer them from separation anxiety.

Saint Bernard has a friendly and welcoming personality. They have a gentle and benevolent behavior who gets along well with children of all age groups.

Although like all other breeds, this breed also requires early training and socialization in order to make sure that they are sociable to other people and the environment.

The dogs of this breed are very willful and dominant by nature who will prove you that they can do anything. You need to make sure that you are giving them firm and consistent training and need to make them feel that you are the leader of the pack.

Saint Bernard is popularly known for their easy-going ways around children. They are very loyal and gentle with Kids and has even earned the reputation of being the perfect babysitter.

But its important not to forget that they are animals and its never a good idea to leave them alone with children. Always supervise your children around them.

How Does It Feel To Live With Saint Bernard?

If you want a dog breed who is loving, calm and protective, you should once think of Saint Bernard. The dog of this breed has many good qualities as they are kind, loving, makes good watchdogs and companion dogs as well.

Although being calm, kind and friendly, Saint Bernard has a stubborn and aggressive behavior, especially the males when they see another male dog of a similar breed. One more reason for their aggressive behavior is because of there are protective and territorial behavior towards their property.

Celebrities Who Own Saint Bernard

One thought on “Saint Bernard Behavior”