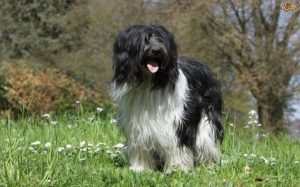 The Shaggy sheepdog is often described as cheerful, funny, clever and brave. They are Dutch sheepdogs with an astounding ability to jump.

The Schapendoes is a medium-sized sheepdog with an intelligent temperament. They are working dogs and in order to adjust to a family, they need some type of job to keep them busy. You can give them jobs like fetching the paper or keeping the toys in their place.

Origin And History Of Schapendoes

The Dutch sheepdog is considered to be an all-around farm dog. These dogs were mostly found in the province of Drenthe, in the northeast part of the country, these dogs were also known outside their native Netherlands.

The Schapendoes breed was not recognized as a distinct breed until World War I and came close to extinction in the 1940s because Border Collie’s were imported and it went as a competition.

A breed Club Nederlandse Schapendoes was formed in 1947.

Yes, the Scahapendoes are suitable for and known to be more energetic, playful and affectionate around children. However, children must be taught to interact with canines and should be taught not to pull the dog’s coat and ears. And it is important to supervise the interactions between the child and the canine.

The temperament of Schapndoes is friendly and adaptable, they are lively dogs who require plenty of exercise and playtime to keep them healthy and happy.

The Schapendoes tends to be independent but is always cooperative and eager to please. They tend to enjoy with their family members, so you can expect them to stick close to you both indoors and outdoors.

The Schapendoes are alert by nature so you can expect them to be a good watchdog. Although these dogs are not but can be nuisance barker if they are left alone in their own way and becomes bored.

Start training your Schapendoes the day you bring them home. For their training don’t wait until they are 6 months old or you will have to face a headstrong dog. They are considered to be quick learners and training them is moderately easy.

Like all other herding dogs, this dog breed requires a lot of socialization or when they become adult, they may tend to more cautions or suspicious. Socialize your Schapendoes puppy with different environments, people and situations so they can learn to be adaptable.

Facts about Schapendoes dog breed are:

The Schapendoes tends to suffer from some common health problems, which include:

Schapendoes are found in 9 colors, which include:

Schapendoes dogs give birth to 3-8 Puppies at a time. If you want a Schapendoes puppy, you need to spend an average amount of $500 USD- $700 USD.