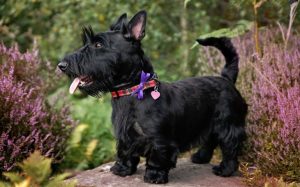 The Scottish terrier often defined as an and lively breed is devoted and affectionate towards their family.

They are Terrier and makes excellent . Because of their short they don’t run much and you don’t have to chase them. They won’t even go for jogging but can accompany you for short walks.

The Scottish Terrier is one of the many terrier breeds and were believed to be originated in Scotland and England. They were specially bred for digging out and killing vermin on farms.

The Romans called the Scottish Terrier “terrarii,” which means “workers of the earth” and was derived from terra, the Latin word for Earth. Dogs of this breed were excellent hunters and still hunts today.

The Old Scottish Terriers is thought to be one of the oldest breeds in Scotland and the for all other terrier breeds. This breed is absent today but was considered as a worker with a lot of strength, and stamina.

Scottish Terrier is fine with children and also been called a nanny. However, like other terriers, this breed also dislikes being pulled or bullied and will react poorly. Therefore, they are not recommended for homes with small children or toddlers. But if your child is well-behaved and approach calm and gently, they will appoint themselves as their guardian.

The Scottish Terrier is friendly and playful as long as they are a puppy but as they grow up they become bold, jaunty and steady. They are fearless and independent by nature and are very loyal to their owners. They are suspicious to strangers which makes them good watchdogs.

The Personality of Scottish Terrier is independent and confident and when it comes to friends, they are discriminating so it’s better not to expect them to be cozy to all of your friends. But once they are familiar with someone they make friends for life.

They tend to be aggressive around other dogs and have a strong desire to chase, so they don’t do well with families with other small pets. When outdoors, they should be kept on a leash or in a fenced area at all times.

When it comes to training, they tend to be stubborn as they have a mind of their own, but if right motivation techniques are applied they tend to show interest and learns well.

Train them will firm and consistent hand, positive reinforcement in the form of praise and treats are the best ideas to motivate them.

Harsh training and punishment will definitely not work as they are strongminded breed. Their training should be started as soon as possible, don’t wait until they are 6 months old or later you have to deal with a headstrong dog.

Amazing facts about Scottish Terrier are:

Scottish Terriers are generally healthy dogs, but like all other breeds of dogs, they’re prone to certain conditions and diseases, which include:

Scottish Terrier are found three in colors, they are:

Dogs similar to Scottish Terrier are: